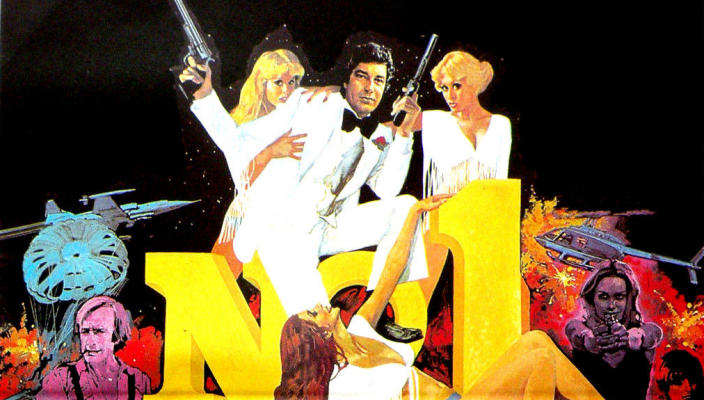 He’s a winner in every game and zero is never beside his name he’s Number One – this is the tagline to the 1979 spy film Licensed to Love and Kill, and from what we’ve read this is probably the best thing about this film, along with the action packed trailer and funky theme tune.

The film is a sequel to No.1 of the Secret Service which was released in 1977. The main role was originally played by actor Nicky Henson, however in the follow up he was replaced by one-time New Avenger and professional coffee bean shaker Gareth Hunt as British agent Charles Bind. We don’t know if it’s a coincidence or not, but this name was also used for the character Charles Hawtrey played in the 1964 comedy film Carry on spying.

In America the film was released as The Man from S.E.X, while in Greece they took the 007 connection further and named it James Mond 001.

Judging by the trailer it’s a fast paced action filled movie. There are exploding clones, a car with a giant rotating blade, scantily clad ladies, an evil organisation called K.R.A.S.H, a female character that agent Bind calls “Lotta Muff” and lots and lots of shooting.

Licenced to Love and Kill hasn’t been officially released on DVD, although the odd ‘copied from video’ ones do sometimes appear for sale on various auction sites.

We’ll leave you with wise words from the Permission to Kill website, who are experts on the espionage genre.

“Does Bind survive? Who cares? This movie is crap.” « Googie Style – Back to the Future German Adidas Catalogue 1968 »