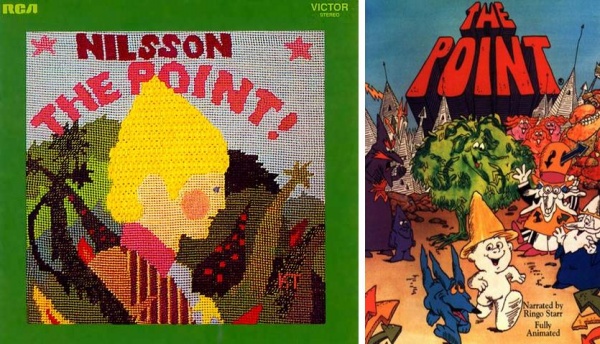 The Point is the sixth album by singer/songwriter Harry Nilsson, and was released in 1971 on the RCA label. The LP itself was a kinda concept album (don’t panic), which told the story of Oblio, a boy with a round head, in a world full of points… He wears a pointed hat to conceal his spherical cranium (our words), and is left alone by residents of the Pointed village. Good story. The next logical step for any tale surely is an animated movie? Fear not, because that’s what happens to The Point next. A cool animated version was created, and narration of the story (in the shape of father telling son the tale), was voiced by Dustin Hoffman. The animation style was very ‘of the time’ i.e good, and other characters voices were provided by relatively unknown-ish actors and actresses, Oblio himself being voiced by Mike Lookinland of Brady Bunch fame.

The first showing was on ABC, February 1971. Subsequent showings were altered because for contractual reasons they weren’t allowed to show the version with Hoffman narrating. Harry Nilsson turned to actor Alan Barzman for narration duties, and the movie continued to be shown. For all video and DVD releases Harrys old mate Ringo Starr is narrator, and to finally finish the narration info, Alan Thicke was the voice of the story on the version shown on cable TV in the 80’s onwards. Incidentally, on the LP, Nilsson himself does all the narration, and characters voices too, between the songs of course.

We’ve included it here on VoEA because of it’s style, the songs, and because it has that certain something. We purposefully haven’t told you too much about the story itself, so you can find out! You may already have the album, or seen the movie, certainly our American viewers will probably have done. The story was also made into a stage show, starring no less then Davy Jones of The Monkees as Oblio. Of course like everybody else, we were very saddened to hear of his early death. We heart The Monkees. Micky Dolenz was in the production too, and that in turn spawned an album made by the original cast, which also included a few other Nilsson tunes for good measure. Released on MCA in 1977.

A magical tale, complimented by some fine songs, is a pretty good formula in our book….. Nilsson admits he thought of the story whilst tripping on Acid. We’ll let him explain….

“I was on acid and I looked at the trees and I realized that they all came to points, and the little branches came to points, and the houses came to a point. I thought, ‘Oh! Everything has a point, and if it doesn’t, then there’s a point to it.'” We’ve given you part 1 of the movie (Ringo Starr version) from Youtube, and you just have to follow the sequence to watch the whole thing. We hope you enjoy it.