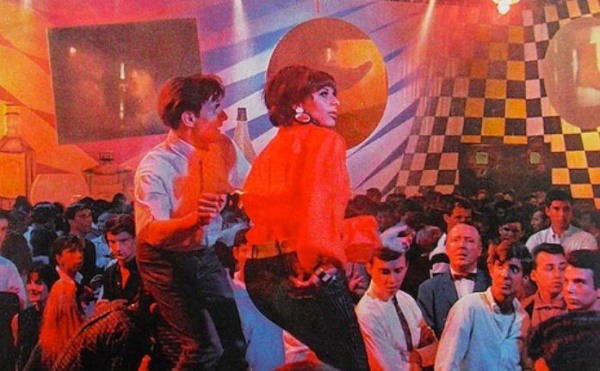 Nightclub and party scenes were not defined to specific film genres during the Sixties and Seventies. For example you’ll find Norman Wisdom dancing away to The Pretty Things in the comedy What’s Good For The Goose.Then at the other end of the spectrum there’s Lee Grant and The Capitols singing in the Boris Karloff Horror The Sorcerers.

Major films like Midnight Cowboy, The Monkees Head and Duffy  all had their own Psychedelic parties on the big screen. Lower budget projects such as the Easy Rider inspired Free Grass and the German adult orientated movie I am a Groupie also had their own far-out scenes.

We haven’t restricted our choices to American and British films. Representing Europe are Ennio Morricone’s contribution to the Italian film Danger Diabolik and some swinging sitar sounds in the French film Manon 70.

Then there’s the brief Get Carter club scene, where you can hear Jack Hawkins and his Orchestra covering Willie Mitchells 30-60-90. Finally we have a VoEA favourite Sammy Davis Junior strumming away on a Rickenbacker guitar in Salt and Pepper, which had the tagline – Meet London’s Hippest Spies! Does it get any better?

So, now you’ve read through our selections of grooviness, it’s now time for you to dig the scenes. And that’s a wrap!