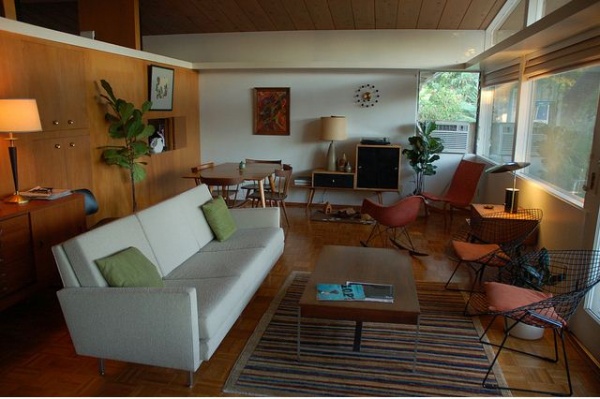 Obviously, here at VoEA we are big fans of Mid Century Modern design, so, if you’re already a fan, we have some nice pics for you, if you’re not, then we offer a brief introduction.

There are no definite dates of this style, but roughly speaking it covers 1933 – 1973, that golden period of prosperity and forward thinking. That feeling is expressed in the sleek, simple designs of that period. Scandinavia and surprisingly, Brazil led the way, producing some fine furniture, furnishings etc, in the style, but every country had their share of designers working in this area.

The space race was another big influence on the objects being produced, a lot of items in living rooms of that period, would have looked at home in a spacious new moon pod called Unit 5. Wood however, was still the material of choice, but new developments had introduced plastic moulding, and glass was prevelant too, not to mention lightweight steel framing etc…This period and style seems to be growing in popularity, and in more and more auction houses you are seeing examples of this era, vintage outlets and indoor markets are getting in on the act too.

The style did not stop at furniture and fixtures and fittings, the ideology also influenced architecture. In the US, Frank Lloyd Wright’s visions of organic architecture, with it’s clean lines, and intergration into nature became sought after. In Europe, the CIAM (Congres International d’Architecture Moderne) was at the forefront of the movement, and in the UK, Brutalist Architecture was the form it took. To illustrate the style, we have delved into the Flickr group ‘Mid Century Modern Design 1945 – 1973’ and picked out a few tasty pics, that give you a nice cross section of people’s own living spaces, their old pics, and objects they have come across on their travels.Why not check it out.