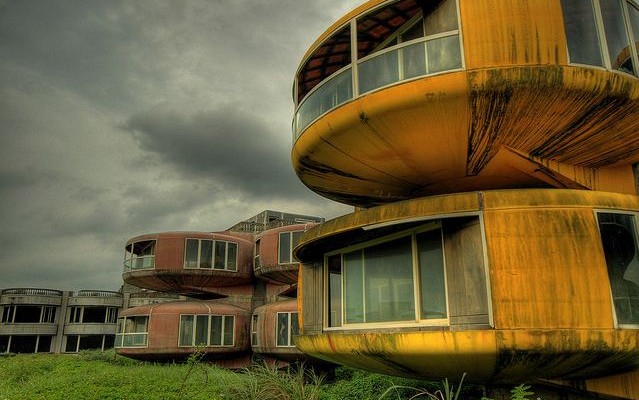 These futuristic style apartments might look like they’re from the discarded film set of the Woody Allen movie Sleeper, but they’re actually houses on an abandoned luxury resort known as the San-Zhi Pod Village in Taiwan.

Construction of the UFO style apartments started in the beginning of 1978.The resort was situated along the coastline in the Sanzhi District, New Tapei City.The apartments were originally marketed to the American military that were serving in East Asia

The project was abandoned in 1980 after investment losses and several fatal car crashes that happened during the construction.Superstitious local people believed the deaths were due to the Chinese dragon sculpture being broken by builders to widen the entrance gates to the complex.

The pods have now been totally demolished and the area is set to become a commercial seaside resort and water-park.