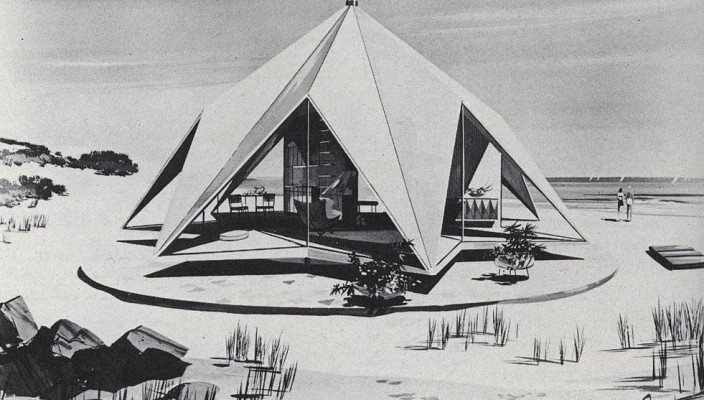 We recently featured the work of Syd Mead – a man who creates futuristic space-age artistic impressions but here we take a more practical, down-to-earth look at how futurologists (not sure whether they were called that then) predicted life would be lived way ahead in 1975 from their perspective in 1962.

Whether it be the first computers in schools, ultrasonic dishwashers, (whatever happened to those?)meals that are created at the push of a button or what could lay claim to be the world’s first flat screen TV people in 1962 were taking a reasonable stab at how life would look 13 years on and in fairness probably weren’t million miles adrift.
Take a look at how the future of 38 years ago looked some fifty one years ago and wonder what will be different in our lives thirteen years hence come 2026 – alternatively you could ask a futurologist and see whether we’ll all be using jet packs and flying cars (unlikely but hey, you never know).

by Arnold B. Barach 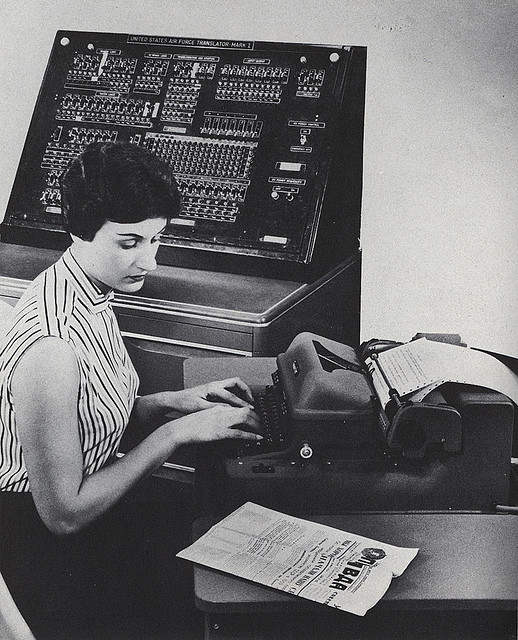 Translating Machine. Typist copies story from Russian newspaper Pravda on special machine which converts Russian letters to punched holes in paper tape. Insertion of the tape into another machine produces translation. By the 1970’s, automatic translation of practically all foreign publications and books will be routine. 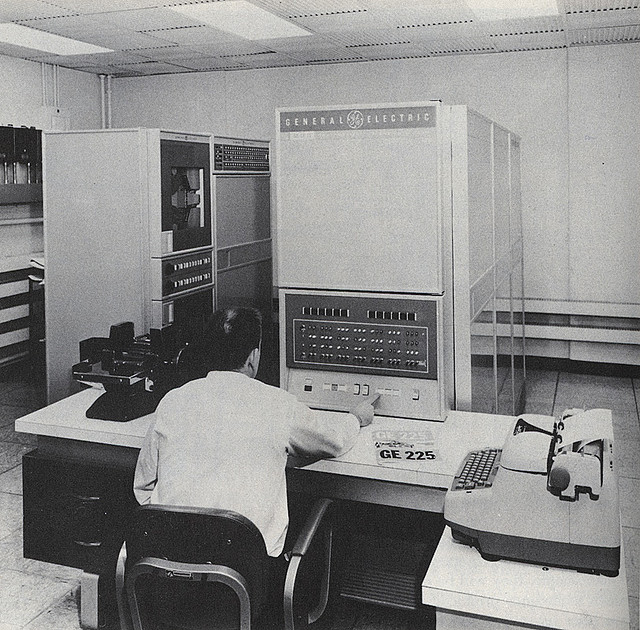 Reference Finder. Every 60 seconds, day and night, approximately 2,000 pages of books, newspapers, or reports are published somewhere in the world; and the output is increasing by leaps and bounds. Libraries will ultimately be forced to use computers such as this for locating documents and references, since it will be so difficult otherwise to keep up with the printed material. This pioneering installation is at the Center for Documentation and Communication Research at Western Reserve University. 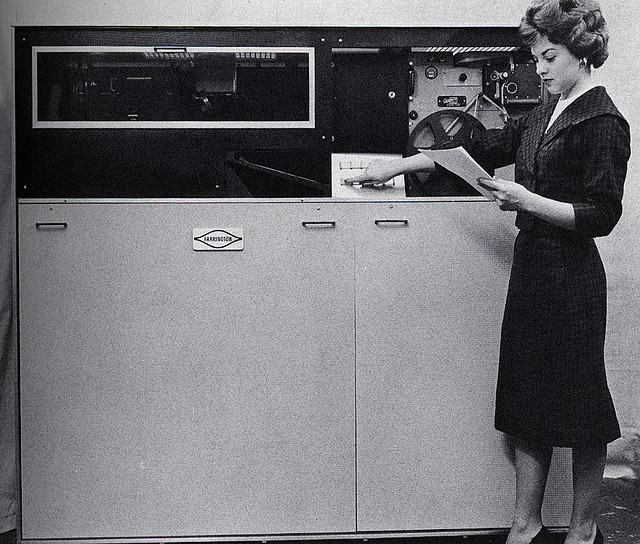 Reading Machine. Printed pages or typewritten documents placed in this machine are recorded on punched paper at a speed of 240 characters a second. The punched paper then can be fed into another unit for reproduction of what the machine “read.” A few offices are already being supplied with this type of machinery. By 1975, it will be standard office equipment. 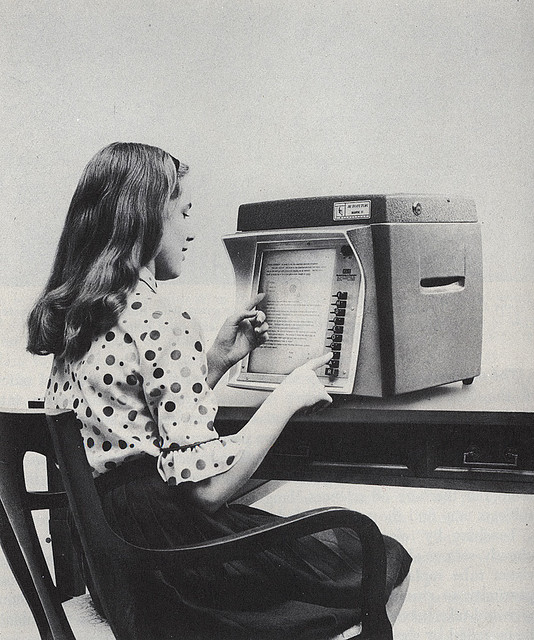 Push-Button Learning. Teaching machines break complicated subject matter into bit-by-bit segments, permitting each student to progress at his own pace. This machine, for example (called the “AutoTutor”), first presents a unit of information. Then come questions based on what the student has learned, together with alternate answers. If the student presses the right buttons for the answers, he is “rewarded” with a new unit of study which appears on the machine. If he flubs the answers, a paragraph of text appears on the screen setting him right, and then he tries again. On the right is a classroom demonstration of the machine — a scene that will be commonplace in future years in most schools. 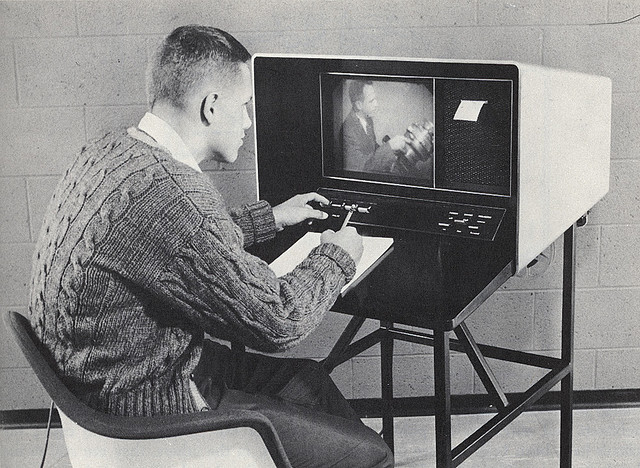 Film Based Teaching Machine. Student pushes one of four buttons to give answers and his score appears on paper slip at upper right. Teaching machines, expected to boom in the next decade, usually operate on the principle of repetition until the pupil understands. They aim to speed up the learning process and relieve teacher of much paper work in the classroom. 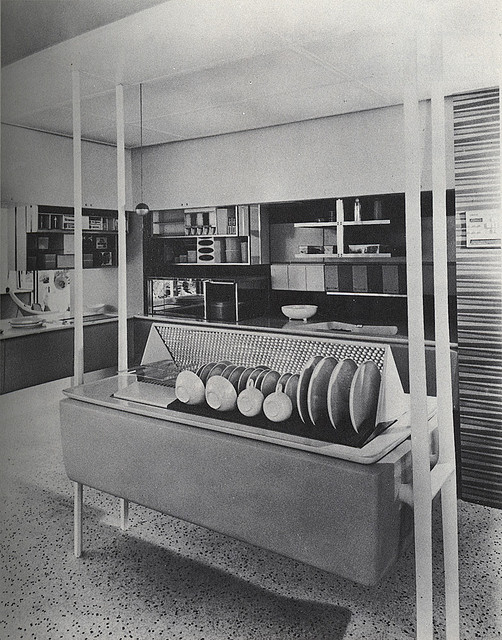 Kitchen for a 1975 Bride. The dishwasher is ultrasonic. The freezer and refrigerator units (rear) are lowered and raised at the push of a button, disappearing behind the plastic paneling when not in use. The range is electronic. Special cabinets are included for storing atomicradiated foods. Most manufacturers of electrical equipment have designed similar kitchens for the seventies. This one is the brain child of Kelvinator. 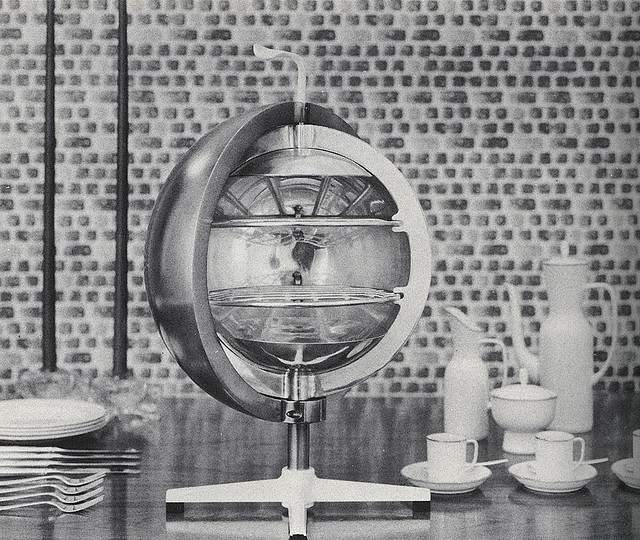 Oven in the Round. Portable oven, by designer Greta Magnusson Grossman, is intended for broiling and baking at the table, on the patio, or in the kitchen. Round half-spheres can be moved in either direction to open or close the oven. Cooking would be by fast radiant heat. Devices such as this point the way to new informality in the home.

Two Variations of Future Television Sets. On the left, a triple-purpose unit for the housewife, enabling her to watch her children at play or identify visitors at the door or watch her favorite color television program. On the right, a salesman’s video-audio tape player, housed in an attaché case, and designed to project visual sales presentations as well as to function as a dictation unit. 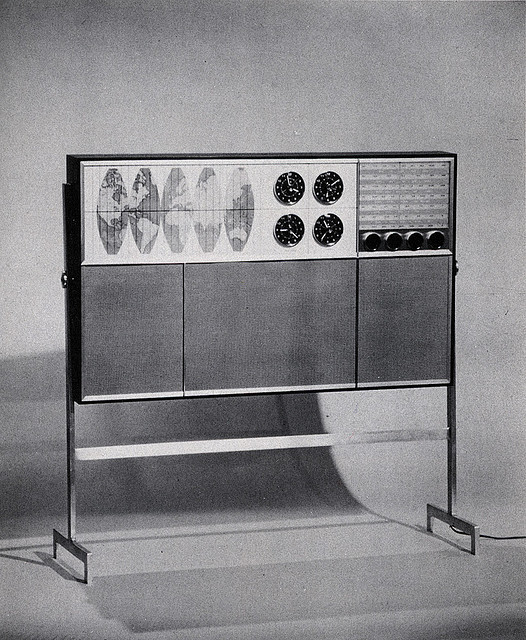 What’s On Delhi-Television Tonight? This is the ultimate in proposed television sets for a decade hence. It can receive television signals bounced from circling satellites, bringing programs from any city on the globe. The spot of origin of the program is indicated by a light on the world map in the upper panels. Round dials are clocks showing the hour in four major time zones. Dials at right are for tuning and sound control. The set is only three inches thick. On the reverse side it is equipped with an international stereophonic radio. 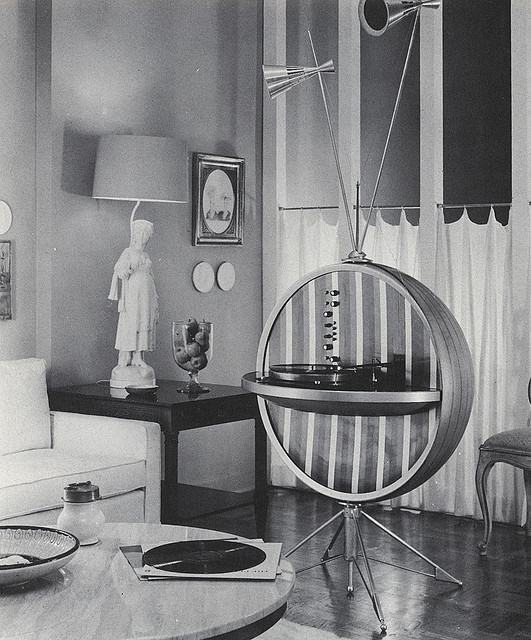 Hi-Fi Sphere. High-fidelity sets do not have to be square, and they do not have to be long. This look into tomorrow is an effort to blend the feeling of a musical instrument with modern electronics. Engineers have long maintained that a sphere is the ideal source of sound reproduction. Note these features: The cone speakers can retract, can have a span of six feet between them, and can be pitched in any direction the best stereophonic effect. In the base of the sphere is a woofer speaker, facing inward. When not in use, the three-foot aluminum globe can be completely closed present a decorative sphere. 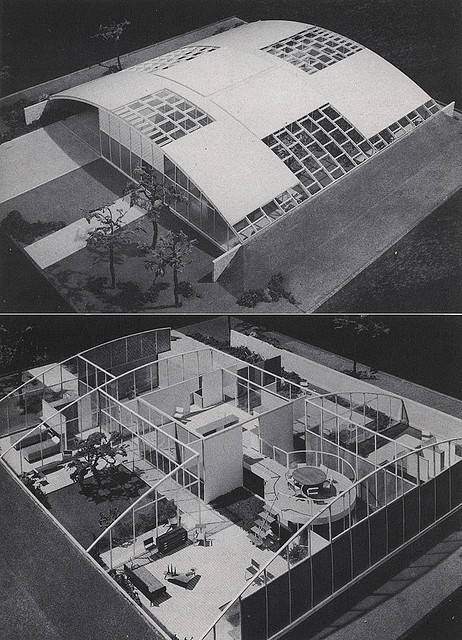 House for a Small City Lot. Lightweight steel arches are the secret of this low-cost house for a city lot of limited area. Note how arches span both living area and outdoor recreational area. Model with roof removed shows how living space would be arranged. By 1975, land to build on will be much scarcer than today in big-city areas, so architects experiment with new housing concepts such as this to make the most of what will be available. 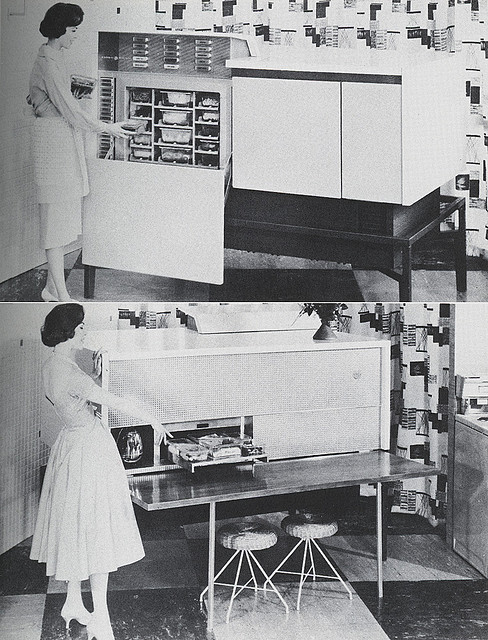 Push a Button, Get a Meal. Among tomorrow’s “wife-savers” is this working model of a combination electronic oven and food freezer. Meals are prepared in advance and stored in the individual freezer compartments, each one labeled on the corresponding push buttons. At dinner time, the housewife pushes the appropriate buttons; and in less than half an hour, the full meal emerges at the rear end of the appliance, hot and ready to serve (lower picture).