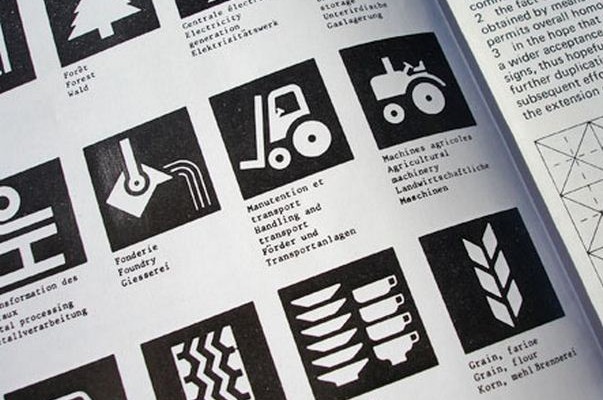 Icographic Magazine was a visual communication magazine started in 1971. By visual communication we mean signs, logos, fonts etc, anything that gets a message across, and the simpler, the better. We are big fans here at VoEA of these simple modernist style designs, and so plundered the net for a few pics of the aforementioned magazine.

Founded by John Halas, and edited and designed by Patrick Wallis Burke, it had more than just pictures of the designs. Plenty of chat too, the psychology of perception being one of the topics covered. It featured world advancements in visual communication of all kinds, and by all kinds of designers, and the period in which it was produced thankfully gives us some nice sharp designs. If this was done in the 80’s, perhaps it wouldn’t have been quite so striking. Some of the images will be familiar to you, the Argentinian Football World cup logo from ’78 for instance, and maybe a few signs that have become classics. The magazine design itself, was very similar to the subject matter it covered, hoping to be considered a design classic in it’s own right, and a darn fine job they made of it too.

There’s not an enormous amount of info on the interweb to follow up, but if we ever see copies in our local charity shop, we will be purchasing…. Blaxploitation B-Movie Posters
Summer in The City - 1969
Up, Up and Away with the 5th Dimension
Unexpected Gem: Johnny Mathis – Evil Ways
1970s Music Billboards on Sunset Boulevard
40 Groovy Retro Japanese Adverts
Blood, Chet and Tears
1970 - An Amateur Band Play By a Nearby Barn