Here we are with the next in our World Cup series, and this time it’s Spain 1982. The games were played all over the country, including a few of the big name stadiums, in June/July of that year. As usual we are concentrating on the images around the competition, but the crucial facts are these…

The final was battled out between two big hitters in West Germany and Italy, sound familiar? The final score was 3-1 to the Italians who got better as they progressed in the competition. They had a goalscorer on fire in Paolo Rossi, and he ended up as the Golden Boot with 6 goals, Italy had booked their place in the final with a 2-o win over Poland in the semi’s.. West Germany’s semi final was bit tighter, winning 5-4 on penalties after drawing 3-3, but a great game. 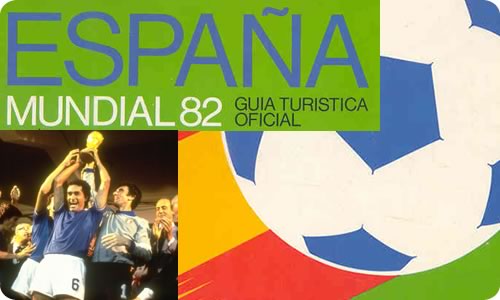 The home countries fortunes varied. England got off to a flying start when Bryan Robson scored against France after 27 seconds, going on to win the match 3-1 and top the group. Similarly, though more unexpected, Northern Ireland topped their group after their opening matches, which included a 1-0 win against hosts Spain. Scotland were a little unlucky in their group matches, losing out on progression from the group with an inferior goal difference to the Soviet Union. Both Northern Ireland and England went out at the next stage, England having two goalless draws with West Germany and Spain, and that was that for another four years. A good World Cup in every sense, very entertaining indeed, with some great players on show, some fine goals and a cracking semi final. A great match between Italy and Brazil which ended 3-2 to Italy, and Maradona at his finest.

The only blot on the copy book was a truly disgusting challenge by Schumacker the German goalkeeper, on Battiston of France in the semi final. Racing out of his area, he poleaxed the French player cynically with no eye on the ball, and broke his neck. Remarkably the ref didn’t even blow for a foul! Oh yeh, and the Spanish Orange Mascot was called ‘Naranjito’. A truly great World Cup, so enjoy these images.