Before Woodstock, before the summer of love and way before the Glastonbury Festival, came what can arguably lay claim to being the World’s first ever rock festival. It was held in the Tulip Bulb Auction Hall in Spalding, Lincolnshire on the Spring Bank Holiday Monday 29th May 1967 with Jimi Hendrix on the bill plus Cream, Pink Floyd, the Move and Geno Washington – here we take a look at Barbeque ’67 also known as the Spalding Rock Festival an event that was not only ahead of its time but also never to be repeated. 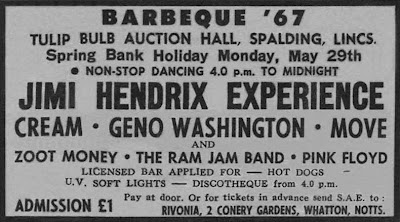 The whole idea for the Spalding Rock Festival came in 1966 when local promoter Brian Thompson (who sadly passed away late 2011) decided to book The Move and Geno Washington, both of whom were pretty big names at the time, for a gig the following year. When he was talking to the management company in London to secure the bookings he was persuaded to take on three other acts who, whilst they were not well known at the time, were expected to go on to big things. They were Jimi Hendrix, Pink Floyd and Cream. (Incidentally Brian Thompson also put on an event the following year in nearby Whittlesey called Barbeque 68 featuring Fairport Convention, Donovan, Fleetwood Mac and The Move).

The festival was held in the now demolished local Tulip Auction Hall, presumably the only local venue large enough to host a sizeable concert of this nature and the tickets were priced at a fairly reasonable one pound each. In addition to the stellar line-up he had already secured Brian Thompson also booked the Sounds Force Five, a fairly popular local band, just to make sure there was a reasonable turn-out. Little did he know. 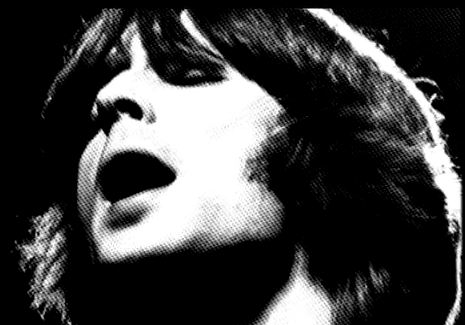 The event had been advertised nationally and from the time in 1966 when the line-up had been booked Hendrix, Pink Floyd and Cream had all started to get national and international recognition. Estimates vary but the general consensus is that tens of thousands of mainly ticketless people descended on the sleepy market town that Bank Holiday Monday and the concert has gone down in legend, not only for the acts that performed, but also for the poor organisation and the fact that absolutely nobody expected anywhere near the kind of numbers that arrived. 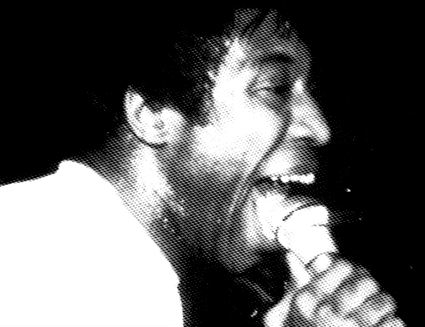 The Sounds Force Five came on stage in-between the main acts whilst roadies re-arranged the equipment for each new band. Pink Floyd were first on stage followed by The Move, they were billed as the ‘psychedelic bands’ so were grouped together, next up were the ‘blues’ performers – the Jimi Hendrix Experience and Cream. Hendrix’s performance is generally considered not to be one of his finest but he did manage to set light to his guitar which was promptly put out with a fire extinguisher and the frazzled instrument was then dumped in a bin from whence it was never claimed. Somewhere under a large pile of landfill deep in rural Lincolnshire lies a potentially very collectible guitar. Cream with Eric Clapton on lead guitar were on next and by all accounts Clapton, who had been the subject of recent media attention comparing his skills with Hendrix, was on top of his game that night and blew Hendrix off the stage. After Cream came Zoot Money and his Big Roll Band and then, the guys who stole the whole show – Geno Washington and the Ram Jam Band. As seasoned performers and non-stop tourers these guys knew how to get a tulip hall full of mods and rockers going and they tore the roof off the place. 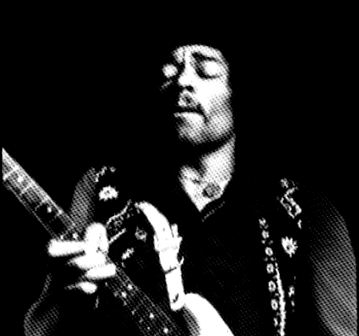 Now whilst we’re undoubtedly a blog that focuses on pop culture from the past we are not necessarily of the opinion that the good old days were always the best. Memories tend to favour the good times after all. Having said that though you would have to go some way to beating what must have been a fantastic afternoon and night to remember – seeing six bands including both Hendrix and Clapton all for the princely sum of one English pound, in a tulip hall, in Spalding. Does it get much better?

By way of a commemoration of this completely one-off event and as a tribute to its appeal still some 45 years after the event, we understand the Nottingham based New Perspectives Theatre Company is looking at the possibility of turning Barbeque 67 into a theatre project. Now that could be a good night out. 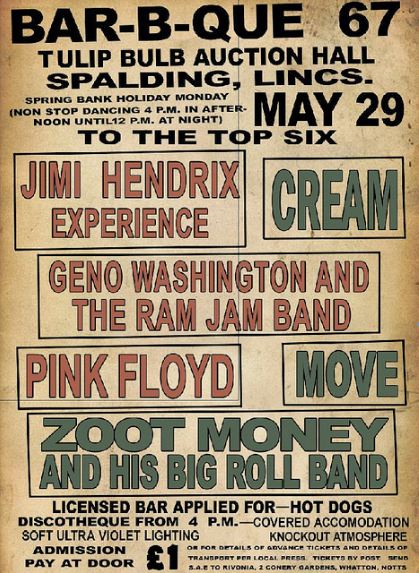