Up, Up and Away with the 5th Dimension

They’ve been sampled by Public Enemy, De La Soul, Lauryn Hill, Mos Def and er, The Prodigy. They first formed as Ray Charles’ backing band way back in the early Sixties and are still performing to this day – let’s go up, up and away and take a look at the wonderful world of the 5th Dimension.

The origins of the band started in 1963 when Marilyn McCoo, a former beauty queen and Lamont McLemore joined forces with Floyd Butler and Harry Elston to form a band called the Hi-Fis. They began life playing local clubs in Los Angeles and the following year came to the attention of Ray Charles who, impressed with their vocal harmonies, asked if they would like to join him on tour performing as his backing band. He produced a single for the Hi-Fis called ‘Lonesome Mood’ that was a minor hit in the L.A. area but not much more. 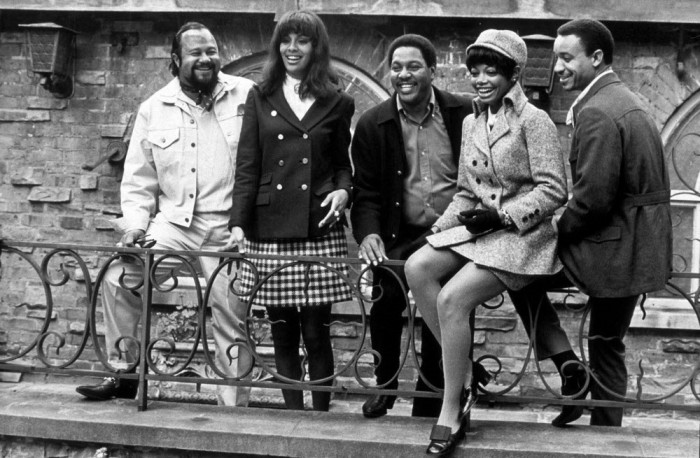 Within a couple of years ‘artistic differences’ caused the band to split and Butler and Elston departed to form a new band – Friends of Distinction (who incidentally had a big spin on the Northern Soul circuit covering Hugh Masekela’s ‘Grazing in the Grass’ – we may well do a post on this band in the future).

Not one to be easily deterred and having had a sniff of musical success Lamont McLemore decided to form another band and started his own recruitment drive. His first new addition was one Florence LaRue – another former beauty queen and also talented dancer, singer and violinist. This was followed closely by McLemore’s old friend Ron Townson, a man who’d had his own 25 member gospel choir at one point and also came close to becoming a professional opera singer. The final piece in the jigsaw was McLemore’s cousin Billy Davis Jr. who had honed his craft singing in gospel choirs since boyhood. The new band called themselves the Versatiles and began rehearsing in 1966. Their first audition was for the Los Angeles arm of Motown Records but was promptly rejected and shortly after they came to the attention of Johnny Rivers who had just started Soul City Records. He agreed to sign them provided they change their name and update their image: the Fifth Dimension was the end result. Their first release was ‘I’ll Be Loving You Forever’ which unfortunately bombed but their next release was a cover of the Mamas and Papas first single release from 1965 – ‘Go Where You Wanna Go’. This had not been a hit first time round but the Fifth Dimension version reached number 16 in the US charts in early 1967 and was the band’s first taste of success.

The big breakthrough track for the Fifth Dimension and the track they are to this day most recognised for came next. Penned by a young songwriter by the name of Jimmy Webb ‘Up, Up and Away’ soared to number 7 in the charts in the summer of 1967 and won the band five Grammy awards including Record of the Year and Song of the Year. The success of this single was reflected in the band’s album sales and their first long player also entitled ‘Up, Up and Away’ reached number 8 in the album charts and was awarded a gold disc. Their second album ‘The Magic Garden’ saw the band stick with the songwriting talent of Jimmy Webb and all bar one track were written by him (and that was The Beatles ‘Ticket to Ride’). This though was not to be as successful as the band’s first album and only yielded a couple of minor hits – ‘Carpet Man’ and ‘Paper Cup’. For their third long player ‘Stoned Soul Picnic’ released in 1968 they looked to another songwriter – Laura Nyro – not only for the title track, which when released as a single peaked at number 3 in the US charts but also ‘Sweet Blindness’ which reached number 13 for them. The third single release from this album is the much covered ‘California Soul’ (written by Ashford & Simpson). 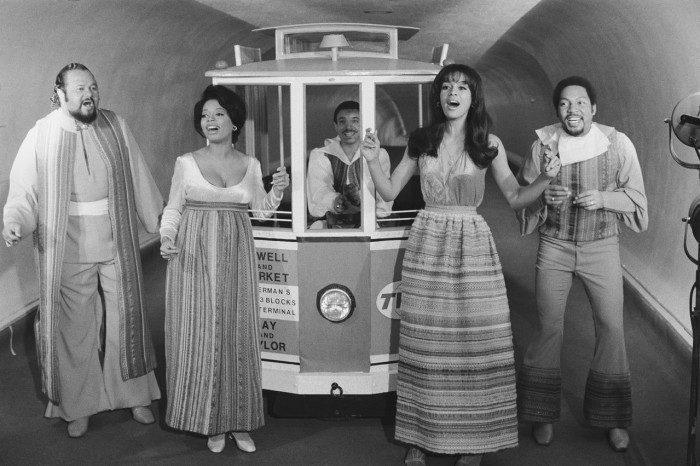 Fifth Dimension’s next release was to be one of their mightiest and also happened under rather serendipitous circumstances. The band was playing in New York at the Americana Hotel and whilst out on a shopping trip Billy Davis Jr. lost his wallet. It turns out he’d left it in a taxi and the next passenger in the cab found it and returned the wallet to Davis. As a sign of his gratitude he invited the honest chap and his wife to that evening’s performance at the hotel. The gentleman in question happened to be a producer of the American tribal love-rock (and semi-naked) musical Hair and in return invited the band to watch it on Broadway. They were blown away by the opening number ‘Aquarius’ and resolved there and then to record it. However, the band’s producer – Bones Howe – when he heard the track felt there was only half a song and it needed a better ending. He then went to Broadway to see Hair for himself and when he heard the track ‘The Flesh Failures’ realised the ending with the refrain of ‘Let the Sunshine In’ was exactly what he was looking for. The subsequent 1969 release of ‘Aquarius / Let the Sunshine In’ zoomed straight to number 1 in the US charts where it stayed for 6 weeks; it sold over three million copies with 2 million of those in just one month and went on to become one of the defining records of the era and also won the band another Record of the Year Grammy. Other singles followed that year including the Neil Sedaka song ‘Working On a Groovy Thing’ and another Nyro composition ‘Wedding Bell Blues’ – in total during 1969 the band were in the US charts for all but 4 weeks of the year. To cap off what would be the most successful year for the Fifth Dimension Billy Davis Jr. and Marilyn McCoo married and also Florence LaRue tied the knot with the band’s manager Marc Gordon.

The following year Johnny Rivers sold his Soul City label to the New York based Bell Records and the band adopted a softer, more easy listening sound. Their first album on the new label was entitled ‘Portrait’ and it gave them one big hit with the Bacharach and David track ‘One Less Bell to Answer’ reaching number two plus a couple of lesser hits with the Jimmy Webb song ‘Puppet Man’ and another Laura Nyro composition ‘Save the Country’. During 1970 in a moment of rare controversy for the band they sung at the White House in front of Richard Nixon. They performed a track called ‘The Declaration’ which was basically the Declaration of Independence set to music thus proving that the Fifth Dimension could literally sing anything. Quite how well it went down with Nixon is open to debate. Some say there was a stony silence when the song finished and a brief ripple of applause led by Nixon. Others say there was a standing ovation. What is certain however is that this performance alienated the band from their black fan base and things would never be quite the same for them again. The new label and the advent of the 1970s saw the band move away from the slightly trippy R&B sound they had pioneered in the late 60s to a poppier sound. 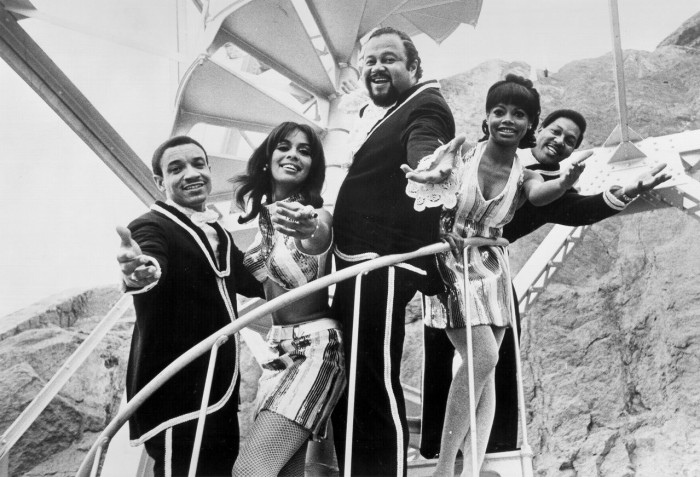 They continued in the early 70s and scored a couple of Top Ten hits with ‘If I Could Reach You’ and ‘(Last Night) I Didn’t Get to Sleep at All’ but the success of 1969 was not to be repeated and in 1975 McCoo and Davis left the band to set up their own projects and their producer Bones Howe moved on to new pastures too. The band continued and in 1976 almost had a hit with ‘Love Hangover’ but Motown released the epic Diana Ross version at almost exactly the same time as the Fifth Dimension’s and Ross’s funkier version won out. Ironically and it would seem with no hard feelings the band signed for Motown in 1978 some 12 years after being rejected by the label. They released two albums on the label but they barely troubled the charts.

Thereafter the band plied their trade on the nostalgia circuit where they can be found performing to this day albeit with a significantly different line-up under the name of Florence LaRue and the Fifth Dimension (Florence being the only original member still remaining). Sadly Ron Townson died in 2002 and McCoo and Davis tour separately as their own act.

The sound of the Fifth Dimension will always be associated with the carefree feel of the late 1960s and their close harmonies were given excellent orchestrated production by Bones Howe. Whilst their sound was more mainstream than out and out R&B they produced a smooth and elegant soulful sound that was all their own. If you want to hear some genuine California soul then you could do a lot worse than check out the back catalogue of the Fifth Dimension. 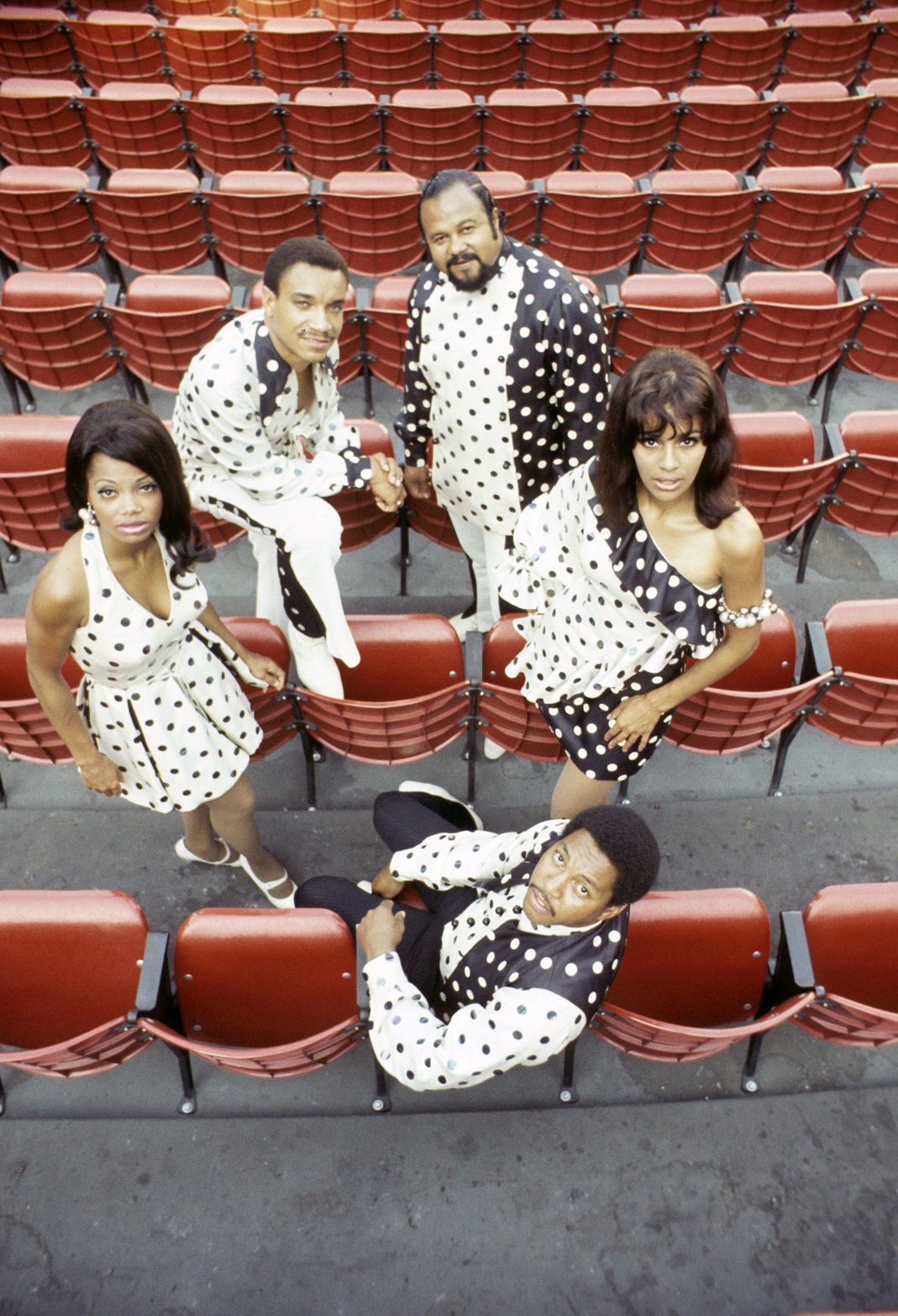 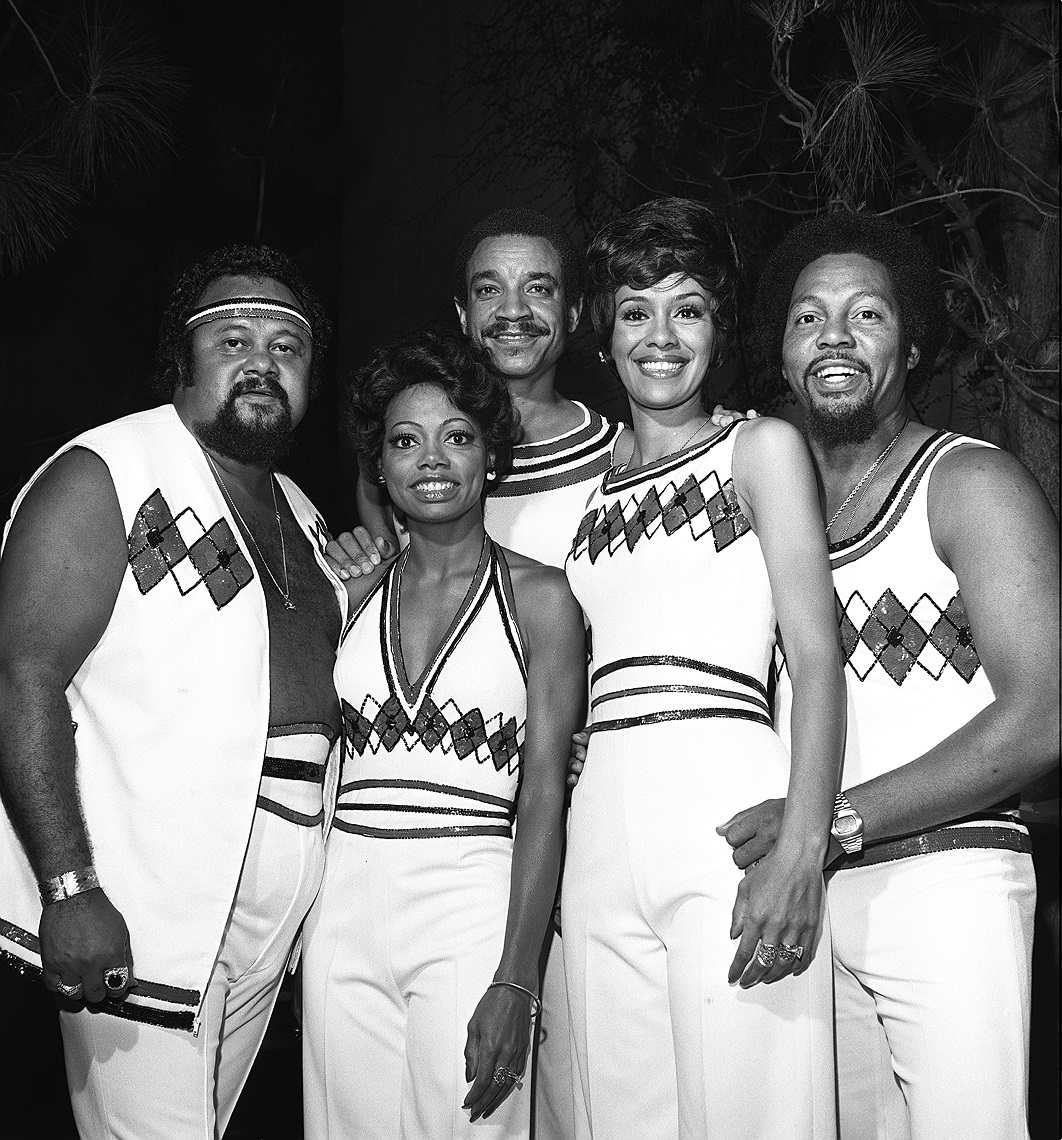 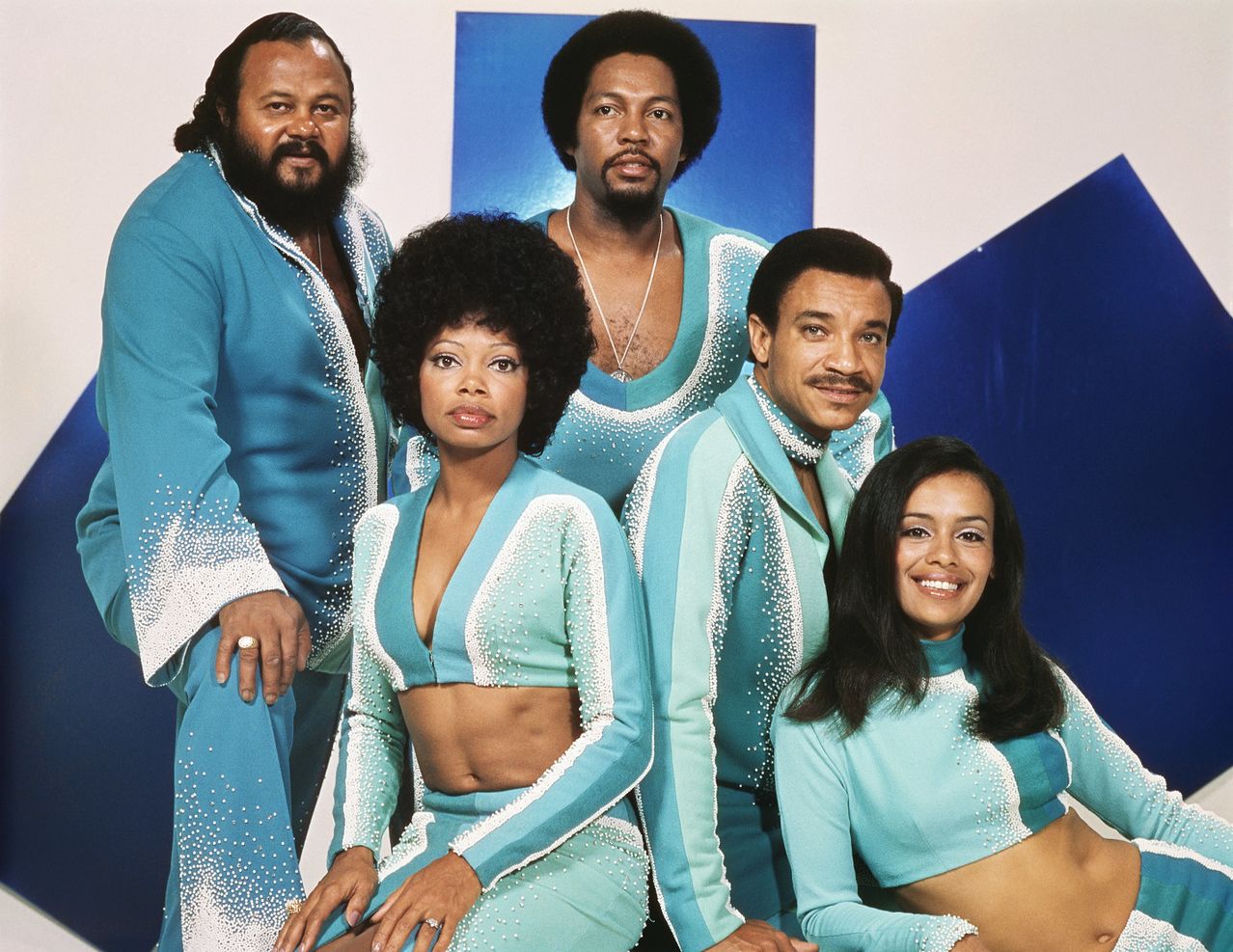