A Nostalgic Look At The Future – A Clockwork Orange

This Nostalgic look at the future post is not as specific as our previous one that featured the house in Woody Allen’s film Sleeper. However, we decided that we would bend the blog rules on this one and here’s why.

Although these pictures from a book titled New British Architecture include Creek Vean, a lovely futuristic looking house by the waterside in Cornwall, Birmingham New Station signal box and some open space office plans. It also features several photos of locations that were used in Stanley Kubrick’s controversial 1971 film A Clockwork Orange. 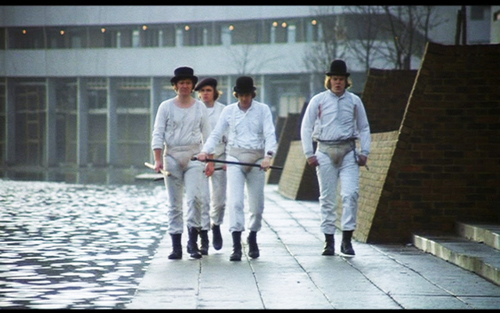 The book includes interior and exterior pictures of the locations that were used in the film. There’s the ‘Ludovico Medical Facility’, where Alex (Malcolm Mcdowell) has his therapy, this was actually filmed on the campus of Brunel University in Uxbridge.

There’s some nice inside shots of the Skybreak House, in The Warren, Radlett, Hertfordshire and a very crisp and new looking South Thamesmead Housing Estate.

If you want to find out more about the other locations used in the film, pop over to the A Clockwork Orange wikipedia page where you can read depressing facts like this –

The record shop where Alex picks up the two girls was in the basement of the former Chelsea Drugstore, located on the corner of Royal Avenue and King’s Road in Chelsea. A McDonald’s restaurant now occupies the building.