When we started VoEA one of the areas we wanted to feature was obscure and sometimes bizarre youth cults that never seem to get mentioned elsewhere. We all know about punks, mods, rockers, teddy boys etc but rarely do the lesser-known youth cults get a mention. So, to get the ball rolling we present our first official youth cult feature and here we take a look across the pond to the good old US of A and a youth cult we’ve only just stumbled across – Juggalos. As youth cults go this is bang up-to-date (rare for us we know) and about as current as you can get. Juggalos and Juggalettes (that’ll be the lady Juggalos) consist of fans of the American label Psycopathic Records and perhaps more specifically the major band signed to that label the Insane Clown Posse (ICP). The story goes that back in 1994 when ICP were performing a live version of their song ‘The Juggla’,lead singer Violent J (real name Joseph Bruce) called the audience Juggalos and it’s stuck ever since. The band and all those linked with the record label started using the term and it has gradually spread from there.

For those of you not familiar with ICP or Psycopathic Records the music they make is hip-hop but not as we know it. This is hardcore hip-hop also commonly known as horrorcore and often references the supernatural and horror movies in the lyrics. On stage they like to dress up as wicked / insane clowns and use a lot of face paint to create their own separate identities. Curiously the ICP band members knew each other before starting through wrestling in their own backyards and this is still a pursuit they are very interested in. They’ve even set up their own professional wrestling federation called Juggalo Championship Wrestling. 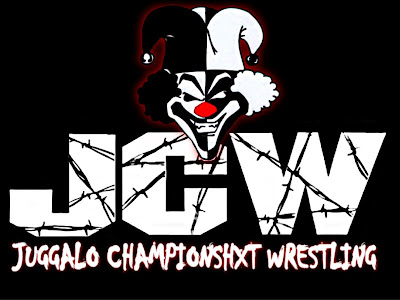 Juggalos see themselves as all being part of a big family and apparently eschew violence although a number of violent attacks and even murders have been carried out by Juggalos over recent years. This has been attributed to a few nutters and one-offs and it seems when they all get together there is very little fighting aside from the organized wrestling. In addition they deny any associations with gang culture despite being classified as such by a number of US states. Musically they generally listen to what’s known as horror-themed rap music and clothes wise they tend to wear jeans and t-shirts. Face paint is de-rigeur when they have any kind of gathering (more on this in a bit).They like to drink Faygo a cheap American soft-drink popularized when ICP started throwing it over fans at gigs. A number of well-known artists call themselves Juggalos including Chuck D, Coolio and Vanilla Ice plus, rather bizarrely, so does Charlie Sheen. 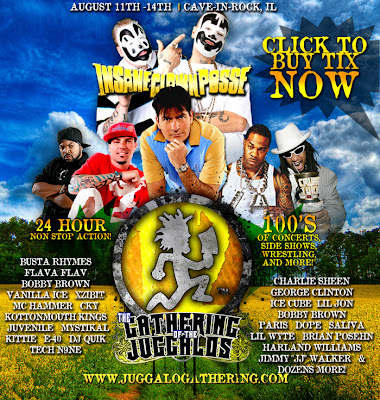 There is an annual Gathering of the Juggalos arranged by Psychopathic Records which has recently seen around 20,000 attendees. It has the usual festival activities with plenty of bands and lots of extra-curricular activities.

Should you harbour any desire to further explore the mysterious world of the Juggalo we’ve pinched some online advice from the good people at wiki-How (thanks chaps) and below is the VoEA beginners guide to becoming a Juggalo. Best of luck and don’t forget the face paint:

2.  Attending a Gathering of the Juggalos (GOTJ) Concert is a great way to meet family and other Juggalos. You don’t have to go, although it is highly recommended.

3. Ignore criticism. If you are a member of the Juggalo family, those who hate you don’t matter. Because after all without haters, how can you tell who truly loves the band?

4. Learn to appreciate yourself and appreciate everyone for who they are and just enjoy life, if nothing else. That’s what the Juggalo family is about.

6. Drink Faygo-brand soda as it is closely associated with the band.

7. Paint your face like Insane Clown Posse members Violent J and Shaggy 2 Dope do. But not exactly the same, do it in a style that means something to you and is completely your own.You don’t have to paint your face, but if the idea excites you, come up with your own design for face paint, try and make it original. Listen to your own feelings on whether you believe you are a Juggalo.

Go to your local Hot Topic and kick there for a grip (or somewhere where Juggalos hang out) – you’re bound to see some Juggalos there, though most of them are mainstream, so just keep an eye out and say what’s up when you see a member of the family. If they’re really down, they’ll say hey back, but as a Juggalo, just a “Hi” is acceptable. You will be more likely to catch one’s attention if you shout “Whoop Whoop”.

Understand what the Dark Carnival is and what it means to be a Juggalo. If you think you know but aren’t really sure, ask somebody!

Faygo is mentioned in alot of the ICP song lyrics. Have a few while chillin with your homies.

You don’t have to roll with a crew to be a juggalo, juggalos always have your back.

Don’t let people say that you’re not a juggalo if you know you are.

Stand up for what you believe in, and don’t let people “push you over” and try to get you to believe “their ways”. Be yourself

Stay strong to the family. Defend it and yourself. Juggalos have each other when we stand strong with each other.

If you listen to ICP and you may get a weird feeling in your lower intestine, like a cancer you can’t explain (Juggalos can feel it inside when they talk about the Dark Carnival or the 6 jokers cards).

A press release from Insane Clown Posse says “there are requirements to being a Juggalo. We want you to be yourself, and ignore haters. If this music touches you, and you get some experience from it, we would be honored to have you advertise our music for us as a Juggalo.” In a 2005 interview, Joseph Utsler explained, “you can be a Juggalo and not even listen to ICP. A Juggalo is a frame of mind and what not. And I was a Juggalo before we started with ICP.”

You should be 18 or over to be a Juggalo due to the parental advisories on the albums.

Don’t try too hard. Don’t force yourself to be something you’re not.

Being a Juggalo is a way of life, not a fashion statement.

Don’t take the words of new Juggalos too seriously. If they are wrong, correct them, but don’t try and act superior.

Juggalos have always had a very bad reputation, so be prepared to defend your beliefs.

Real Juggalos tend to be pretty crazy. It is not mandatory to be crazy to be a Juggalo, but it might help, but they are still family and they should have respect for one another

Defend any Juggalo who is getting picked on, if you know them or not. This is because any Juggalo is still family.

Understand that Juggalos/Juggalettes are often associated with gangs/street violence by the law and other high-power officials. There have been many incidents of fans committing acts of violence, including murder, and cases where younger Juggalos are prohibited from wearing ICP merchandise at school. Juggalos have even been officially classified as a gang in some states(Arizona, Utah, Pennsylvania, and California).

Be prepared for people to hate you for being a Juggalo or Juggalette. Some people don’t understand the Dark Carnival. Don’t let them get the best of you. Ignore them. Their comments don’t matter.

Particularly ignore those who tell you that “hate” is a transitive verb, which has no need of a qualifying preposition. We in the Family hate on things, we do not hate things. Well, actually, the Haters hate on us, we don’t hate anything. I mean, hate on anything. You get the picture.

We have each other and there are many of us, so come to us when you’re lost.
Remember that the family is about acceptance and respect. We don’t agree with bigotry and we don’t care if you’re a richy or a scrub. Just that we’re a family.


So there you have it – the VoEA guide to becoming a Juggalo. We’re not sure how many (if any) Juggalos there are in the UK at the moment but this could be the start of something very big. If anyone asks you saw it here first.