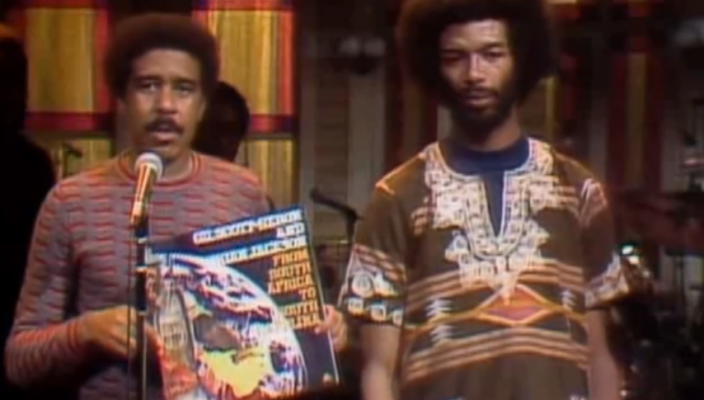 Here we have a really lovely video clip of Gil Scott-Heron with Brian Jackson and his band on Saturday Night Live from December 1975 promoting his album ‘From South Africa to South Carolina’.

Following an introduction by Richard Pryor we see Gil, Brian and the boys perform ‘Johannesburg’ followed by a quick sketch by Pryor then back to the band performing ‘A Lovely Day’.

This is Gil, arguably in his prime, with the band performing effortlessly but still tight as a snare drum. It will be 7 years this May 27th since Gil Scott-Heron passed away and his musical legacy burns just as bright as it ever did. If you’ve yet to discover his music then you’ve got an exciting musical journey ahead of you, if you’re already familiar with the work of the great man then we’re sure you’ll enjoy this clip as much as we have. RIP Gil Scott-Heron.

Dancing in The Park - 1970s Style
Let's have a look at what you could have won
The First Five Years 1966-1971
Syd Mead – Imagining the Future
Automatic (Washing Machine) for the People
Up, Up and Away with the 5th Dimension
DJ Shadow - Just Your Favourite DJ Saviour
Getting Shirty with Woody Allen

« Unexpected Gem: Marti Caine – Love the Way You Love Me From the Motor City to London Town »