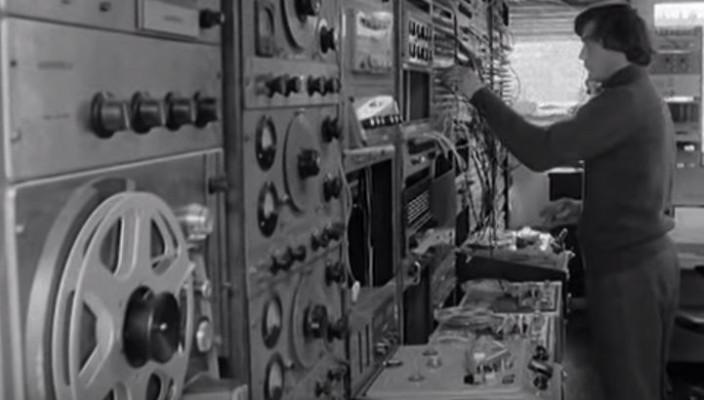 Peter Zinovieff and The Computer Orchestra

It may seem quite antiquated and almost comical now but have a look at the video below and witness what was the basis for one of the first ever synthesizers, conceived and built by Peter Zinovieff who went on to supply his wares to such luminaries as Pink Floyd, White Noise, Kraftwerk, Led Zeppelin and David Bowie. Musical history indeed.

Born to aristocratic Russian parents who moved to the UK after the Russian Revolution, Zinovieff had a privileged upbringing attending Gordonstoun and Oxford University where he gained a doctorate in Geology before he discovered his love of electronic music.

In 1966 he formed Unit Delta Plus with Delia Derbyshire and Brian Hodgson (who both went on to work in the BBC Radiophonic Workshop) with the idea of creating and promoting electronic music. This was not spectacularly successful however and they split up the following year. After this Zinovieff set up EMS (Electronic Music Studios) with electronic music pioneers David Cockerell and Tristram Carey and they went on to manufacture a significant but unknown number of synthesizers due to their rather erratic serial numbering system. Some estimate there may have been 800 made but quite how many are left is anybody’s guess.

EMS was by any measure very successful and continued into the 1970s being one of only four manufactures of synthesizers alongside Moog, ARP and Buchla. The company continued innovating and producing more and more radical, if not necessarily commercially viable synthesizers. By 1974 Zinovieff’s interest was waning and the Japanese in the shape of Yamaha were starting to develop simpler and cheaper equipment. Just as they were teetering on the brink, in 1976 EMS came up with the Vocoder which kept the wolf from the door for a few more years but couldn’t stave off the almost inevitable bankruptcy procedures that would follow.

The company continued to function albeit on a much smaller scale but by the looks of it petered out in 1998, or at least that’s the last time their website was updated.

Peter Zinovieff moved to a remote Scottish island where we think he still resides and it seems most of the ex-staff from EMS are still involved in synthesizers or some form of creative electronic music.

Have a look at the early days of electronic music below – we’ve certainly come a long way since 1968.