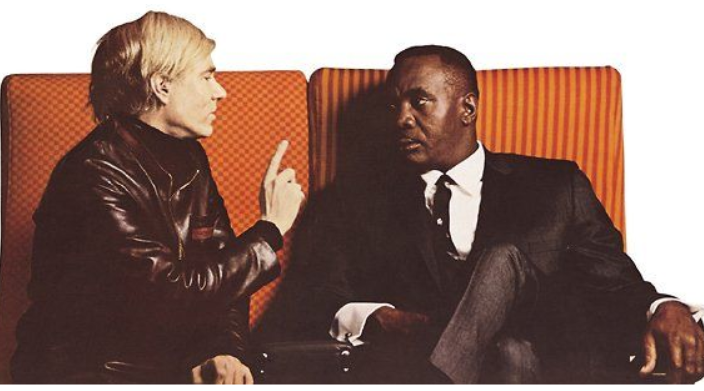 We really should do a complete post on the 1968 re-branding of Braniff International Airways as it’s a fascinating example of the power of marketing and how most of us make decisions based on perception rather than ‘reality’. In the meantime and to whet your appetites here we have some great adverts from their 1968 TV campaign which really should be titled ‘opposites attract’.

We’ve scratched the surface already with Braniff featuring as we have their excellent ticket jackets and magazine ads in previous posts. Here though, we focus on the medium of television advertising and some unlikely bedfellows who have ended up seated next to each other on their imaginary flights. Our old mate Andy Warhol discusses the beauty of his Campbell’s soup can with legendary pugilist Sonny Liston whilst eccentric, mustachioed, undoubted cultural icon and King of the Surrealists Salvador Dali discusses baseball pitching with Whitey Ford (me neither).

It is said if these ads had been tested using focus groups they would have bombed but gut instinct and a feel for what inherently works saw them released and business tripled on the back of them.