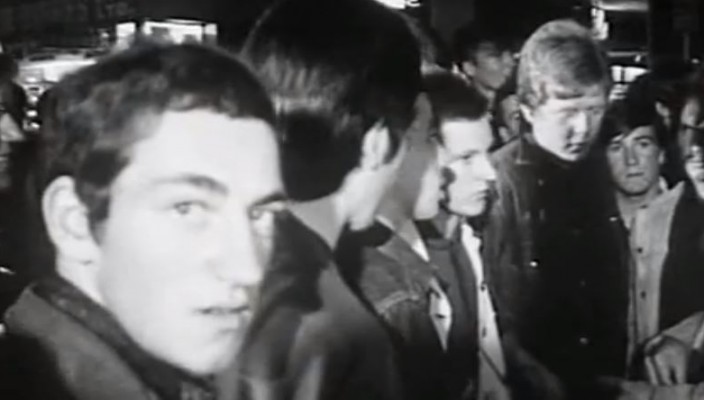 Stay Sharpie – One Night in Adelaide

Evolutionary biologists have long been fascinated with the development of species on the Australian sub-continent and the way they have evolved without the effect of any external influences to create such unique creatures as kangaroos, wallabies and koala bears. Here at VoEA, whilst we have no pretentions to being such high-falutin egg-heads as those who study the sciences, we still like to step back and observe how fashions and cults evolve in their own environments and here we have a cracking example: the Australian ‘Sharpie’ – not mod, not skinhead, not even suedehead but still a creature that had its own rules and morals and ruled the suburban jungle from the late 1960s through to the release of Saturday Night Fever in 1976 and their demise from the mainstream into obscurity.

Sharpies were born from the tail-end of the mod movement, the arrival of Ten Pound Poms from the UK and presumably the desire by Australian youth to have their own identity rather than being tagged through fashions that had developed on the other side of the world. The Sharpie name defined the look which was sharp but also unique in its own way. Trousers were generally made by local tailors and worn with all-leather chisel toed shoes, cardigans and personally designed t-shirts. This was a gang culture and a violent culture to boot (literally). They took the smart elements of the mod movement along with the obscure sounds and aspects of one-upmanship, the aggression of the skinhead movement along with the very fitted clothes that made the wearer look bigger than he was and the multi-racial aspects of the ska movement. Their mode of transport was not scooters or even cars but rather the local railway network where they could move around without attracting undue attention. Such was their numbers during the mid-to-late sixties that they became almost untouchable by the police and were generally left to their own devices. They tended to exist in the larger cities predominantly Melbourne and also Perth, Sydney and as we see here Adelaide.

The Sharpie trend died out with the arrival of disco on the shirttails of Saturday Night Fever and the subsequent punk explosion and as with most youth cults and fashions it was ultimately about guys getting girls and vice-versa; when all the girls started getting into the disco sounds or pogoing the Sharpies had to adapt and evolve further to avoid becoming extinct.

We hope to do future features on Sharpies and other antipodean fashions but in the meantime take a look at what was happening in Adelaide in 1967 at Big Daddy’s and the 20 Plus disco and check-out what the sharp-dressed Sharpies were wearing on the mean streets of South Australia.