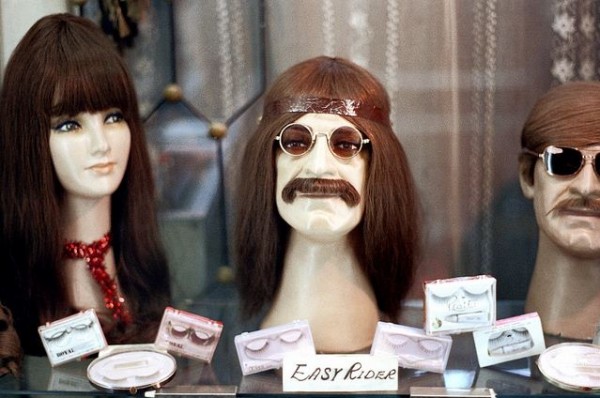 Comb Together – My Fake Moustache 1969

On our travels around the internet we sometimes find one-off  pictures that we usually share on our Facebook or Tumblr pages. One picture that stood alone was taken by photographer Nick DeWolf -1972 photo of a wig shop window display in Hong Kong showing a hippy dummy head with a moustache influenced by the 1969 biker film Easy Rider.

We thought we’d have to share our discovery via our social media sites until when we found these pictures from a vintage yearbook and the amusing story of “My Fake Moustache 1969” – a summer tale that features a yearbook prank, the Vietnam war, airbrushed peace signs and a terry cloth tie. 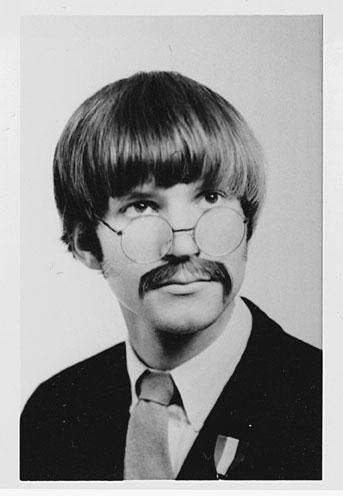 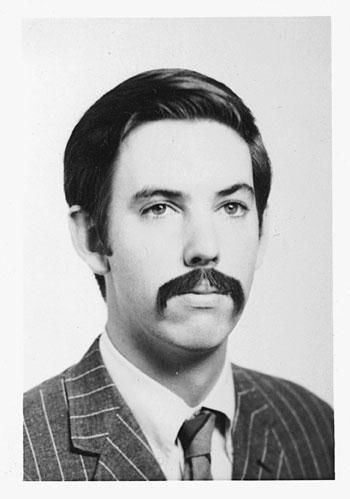 During the summer of ’69 someone sent me a fake moustache in the mail anonymously. I took it back to college with me in September and showed it to my roommate Calhoun. Neither of us had a clue what to do with it until the annual yearbook photo sessions were announced.

I showed up for my session wearing a terrycloth tie, a pair of glasses I’d bought for looking weird in, and a medal ribbon I’d picked up in an army-navy store in Mooresville–to which I’d attached a blue metal “peace” symbol–and pinned to my lapel. I combed my hair forward and cut it straight across. My sideburns didn’t grow out in time, as you can see.

The end result was pretty satisfying, but the photographer edited out the peace symbol for the yearbook. The Vietnam war was at its height while I was in college; the yearbook publisher edited out all of the students’ anti-war expressions. One guy in a class behind me had painted a peace symbol on his forehead; it was airbrushed out of the final version that appeared in the 1970 annual.

After my session I peeled off the moustache and handed it to Calhoun, who plastered it over his lip with about a half bottle of glue.

Shot In The Dark - Groovy Pinball Machine Art
London Mods - Steppin Out in Seventy Nine
Sidewalk Surfers of Seventy Seven
Sixties Bilzen Rock and Jazz Festival
1970 Yearbook Portraits
The Church in The Graduate
Mick Jagger - Hey, You, Get Out of That Car
Bobbye Hall – The Queen of Percussion Drumming