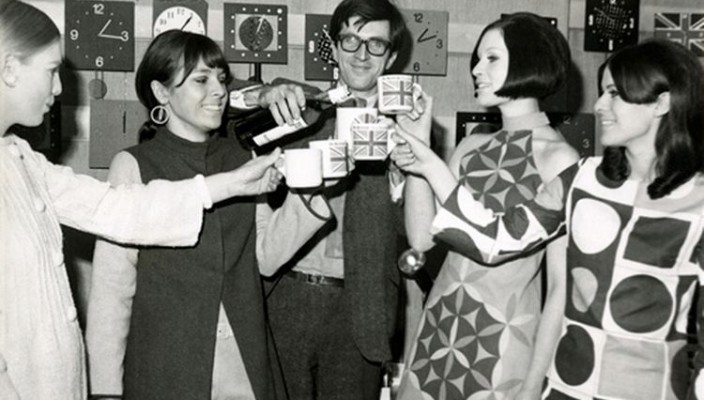 Those of us of a certain age will almost certainly remember some of Paul Clark’s designs from our younger days in the 1960s and 70s particularly his household items. His unique Pop Art take on the Union Flag was possibly one of the first times it had been taken out of context and used on mugs, tea trays and other day-to-day items. It was the mid-1960s, Beatlemania was gripping the nation, and the words of Harold Macmillan from 1957 were ringing true; since the war people in the UK really hadn’t had it so good. The post-war gloom was over and a new dawn beckoned. Britain was booming and was proud. No house was complete without a Union Flag mug or bin. Following on from the success of his early designs Clark relocated from London to Brighton where in 1969 he began teaching at what was then the College of Art. He balanced his duties lecturing on graphic design with occasional curating and writing. He managed to find time to write a book on design called appropriately enough Design (A Crash Course) which if you fancy checking it out is available on Amazon and continued teaching moving on to art and design history.

Paul Clark is now retired but still keeps himself busy and can be found building model rockets and designing and making model kits. Sounds like a great way to spend a well-earned retirement. « Wonder Bread Boogaloo with The Bugaloos »