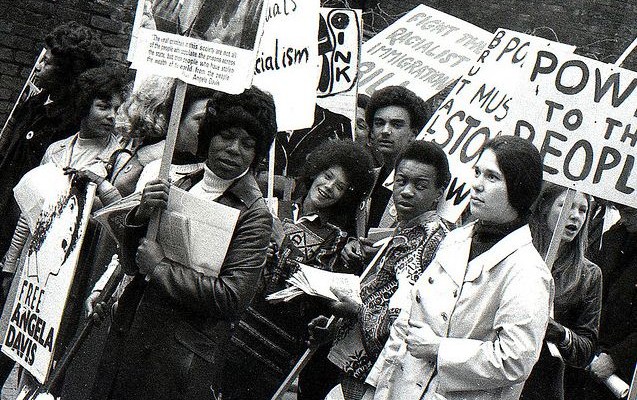 We usually tend to focus on pop culture for want of a better expression but these photos from 1971 really caught our eye and the story behind the protest is quite an interesting one too.

The Conservative government of 1971 is primarily remembered for one thing and that is the Immigration Act introduced by the then Home Secretary Reginald Maudling. The act, which to this day is still the framework for most British immigration law, was known to be controversial but the government of the time expected the inevitable backlash and carried on regardless. The 1971 act centered on the rights of citizens of the Commonwealth to have the automatic right to live and work in the UK. It rested on the concept of ‘patriality’ which said that only those with sufficiently strong links to the British Isles had right of abode. What this meant in reality was that ‘white’ citizens of the ‘old’ Commonwealth from countries such as Australia, New Zealand, Canada and South Africa who were of ‘British stock’ had the right to live in the UK but ‘black’ citizens from countries such as India, Bangladesh and Pakistan (the ‘new’ Commonwealth) without such a strong connection faced the same restrictions as any other person applying to live and work in the UK. They would have to have a work permit, register with the police and only after five years of working and living in the UK could they apply for the right to stay.

The demonstration featured was echoed in other cities around the UK and focused on the perceived racism of the act which discriminated against people basically because of the colour of their skin. One of the main ideas behind the bill was to stem racial tensions – whether this worked in reality is open to debate.