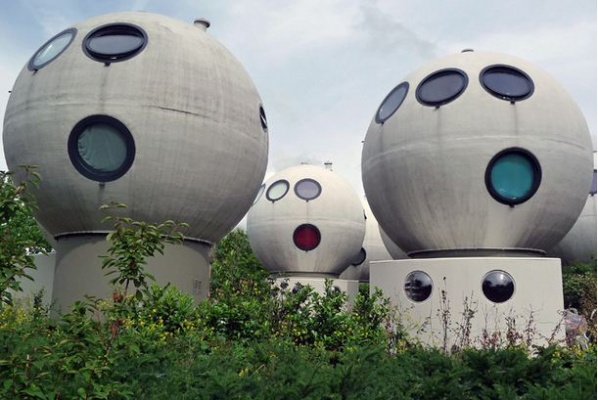 Here at VoEA we like a bit of groovy architecture as we’ve demonstrated previously with our features on the Futuro House , the Kunstoffhaus and of course the legendary Pierre Cardin’s Bubble House. Now we travel to the flatlands of Holland to take a look at what the Dutch call Bolwoningen meaning Globe Housing and what seems to be one architect’s obsession with a design he came up with some thirty years ago.
In the early 1980s the Dutch government granted a large subsidy to the municipality of ‘s-Hertogenbosch situated north-west of Eindhoven. The idea was to create housing for experimental living and from this was born the Bolwoningen. They were the idea of architect Dries Kreijkamp and he wanted to create ‘the optimal experience of nature in all its facets’. Quite how living in a giant golf ball constitutes living with nature is beyond us here but the idea is that with a 360 degree view and the living area on the top floor every window has a view of the surrounding natural environment plus also presumably the neighbour’s windows as well which are all on the same level.

They were constructed in 1984 and are basically PVC structures with a thermal lining placed on pre-cast concrete blocks with access via a staircase. The layout comprises the sleeping area on the bottom floor with two bedrooms, the bathroom and kitchen on the first floor and then the living area with its panoramic view on the top floor. They are relatively small being only 5.5 metres across and consequently tend to be inhabited by single people or couples who like a cosy existence.

Almost unbelievably, they are still inhabited to this day and Mr Kreijkamp, the architect, is still ploughing a lonely furrow promoting his view of future living with the same design but now suggesting we could use them to live on water using a floating woonball as he calls them or for those who can’t manage stairs perhaps a half- woonball at ground-level. Have a look some great photos of Bolwoningen below and also Mr Kreijkamp’s website and see what future living looked like 30 years ago and to some still represents the future today.