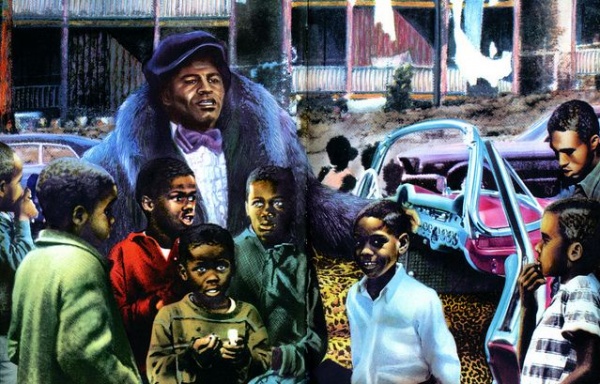 Belgian artist Guy Peellaert is the man responsible for the album cover of ‘Diamond Dogs’ by David Bowie – the one where he’s been illustrated as a half-man, half-dog creature. He also produced the artwork for the Rolling Stones album ‘It’s only Rock’n’Roll’.

Peellaert’s big break came when he illustrated the comic strip Les Aventures de Jodelle, published in 1966 in the French magazine Hara-Kir. His designs were heavily influenced by pop art and psychedelia, we’ll feature this period in a future post. He also designed the poster for the 1976 Martin Scorsese film Taxi Driver.

Guy Peellaert’s artwork was compiled into several best selling books including the million selling 1973 book Rock Dreams, which was written with British rock journalist Nic Cohn. Most of the original artwork from the book was bought by actor Jack Nicholson.

There’s over 80 illustrations so we’ve picked out a few of favourites. In our selection we have Wilson Pickett and Solomon Burke shooting pool, a weird-eyed Who, a meeting of soul greats and a picture of Keith Richards portrayed as a pirate years before he made his film debut in the Pirates of the Caribbean.