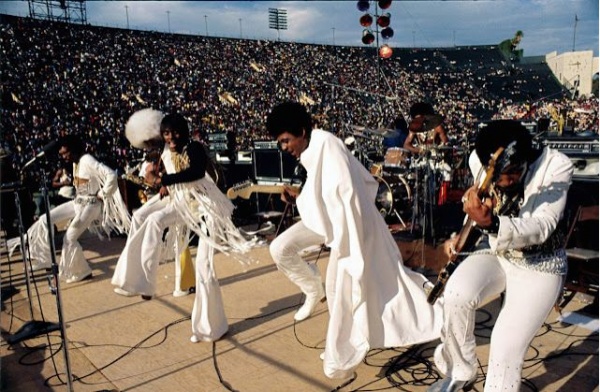 In August 1972 Stax Records organised the Wattstax music festival to commemorate the seventh anniversary of the Watts riots. The riots themselves started with the arrest of a 21 year old African American, Marquette Frye, on suspicion of drink-driving in the Watts area of Los Angeles.

Frye’s brother and mother became involved and as the police struggled to arrest and detain him, the crowd of onlookers grew and became more and more restless. The ensuing riot lasted 5 days, saw 34 people killed, involved more than 30,000 participants and resulted in over $40 million in property damage. The circumstances were not dissimilar to the rioting and looting during the 1977 Blackout in New York: high unemployment within the black community, poor housing conditions and a general feeling of being neglected by wider society and being viewed and treated as second-class citizens. The Watts riots were a seminal moment in African American history and were seen by many as the first mass uprising against the perceived oppression of black communities by the (predominantly white) US authorities.

The concert itself took place in the Los Angeles Coliseum and with tickets only $1 each, to give as many people as possible the opportunity to attend, was a sell-out with over 100,000 people turning up. Virtually the entire Stax roster performed at some point with Kim Weston opening proceedings first performing ‘Star Spangled Banner’ and then what became known as the ‘Black National Anthem’ ‘Lift Ev’ry Voice and Sing’. In between these two songs in a gesture reminiscent of Tommy Smith in the Mexico ’68 Olympics Jesse Jackson encouraged the crowd to raise their right fists in the air as he recited his poem ‘I Am Somebody’ (this was sampled in 1990 by Primal Scream on their excellent single ‘Come Together’). This powerfully symbolic opening was followed by The Rance Allen Group, The Emotions, The Stax Golden 13 (like a Stax supergroup), the Staple Singers and The Bar-Kays to mention just a few of the acts. In-between these performances (a very young) Richard Pryor acted as MC and was there to bring some humour to proceedings.

The day’s proceedings were documented on film by Mel Stuart and the film ‘Wattstax’ was subsequently released in February 1973. It went on to be nominated for a Golden Globe and was also shown at the ‘73 Cannes Film Festival. In 2004 a restored version of the film was re-issued through cinemas and also on DVD.

We’ve found a Vimeo link to the Wattstax film albeit with French subtitles for you to enjoy in the comfort of your own home, so sit back, relax and take a trip back 40 years to enjoy a seminal piece of African American musical history.