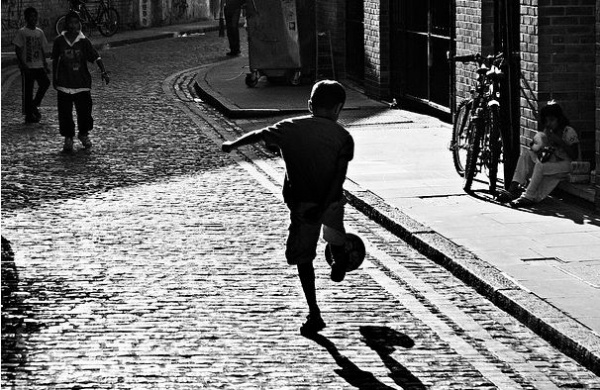 Street Football – Can I Kick It?

Does anything beat a good game of footy with your mates? Yes, I hear the female population reply….. Anyway, we were going to start with the old jumpers for goal posts routine but thought better of it…

Back in the day, when we were young men, we won the World Cup, scored a 30 yard screamer to clinch the FA Cup, and played for some of the finest teams in world football. And all on the local recreation ground, tennis court, and street. Being in East Anglia, you could usually find a patch of grass to play footy on, but when you lived a fair way from such luxuries, the street would do. Every so often the cry of ‘car!’ would be heard, and everyone would move to the side until safe to cary on. I’m sure this is covered in the FIFA handbook somewhere…

Love it or hate it, football is a universal language. Go anywhere in the world, and you will soon come across kids in the street kicking a ball around in heated battle with their mates. Something so simple has captured the minds of lads from Iraq to Dubrovnik, just as it has in Liverpool and Southampton. I’m sure you could happily join in a game with people you have never met before, and what a great way to spend some time with like minded individuals… You’re never too young either (or old come to think of it), and you never tire of the beautiful game. Some of our best performances have been on concrete, with a tennis ball with wire mesh for goals. Even if you don’t like football, the following pictures to illustrate the words may help to ease the pain. To be fair, there looks like a few decent games there. Now where’s my Adidas Sambas?….