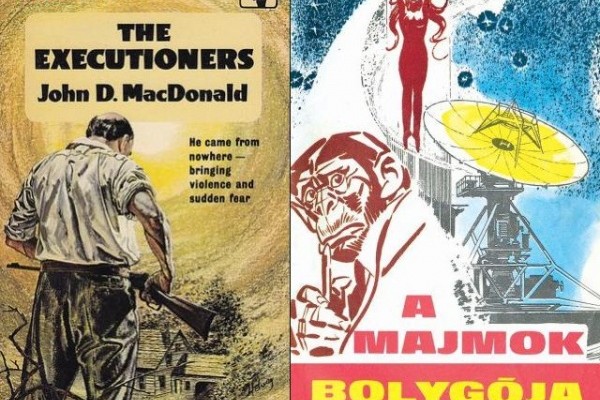 If there’s one thing that lies behind a great movie it’s a great story. Look at all the best films and they all have a great storyline as the foundation on which they are built, no decent storyline – no decent film. ‘Sex Lives of the Potato Men’ anyone? We rest our case.

As a general rule of thumb the book tends to come first followed by the film. In most cases the film title is the same or similar to that of the book but once in a while, for reasons we are unsure of but they are highly likely to involve focus groups, the title of the film bears no relation to the book.

So, after this slightly convoluted introduction, we present our selection of books that have been turned into classic films (and the Six Million Dollar Man). We’ve given the film titles below the book covers but if you like a challenge see if you can guess what film they ended up as without having a sneaky peak first.

This 1972 novel was adapted as the TV series The Six Million Dollar Man. Actor Lee Majors took the lead role as the bionic man Steve Austin.
Author Martin Caidin wrote another three books in the series – Operation Nuke, High Crystal and Cyborg IV.
Pierre Boulle’s 1963 science Fiction book would later become the film Planet of The Apes
The 1968 movie also spawned a TV series and several sequels, including the 2011 blockbuster Rise of the Planet of the Apes, which is described as a “Reboot” of the film series.
The Executioners was first published in 1957 and was later turned into the film Cape Fear in 1962.
The movie starred Robert Mitcham and Gregory Peck in leading roles, they also appeared alongside Robert De Niro and Nick Nolte in Martin Scorsese‘s 1991 remake of the film.
This futuristic science fiction novel by Harry Harison was published in 1966. The story is set in New York City in 1999 and dealt with the subject of population growth.
Seven years later the book would become Sci-Fi film Soylent Green starring Charlton Heston.
Crime reporter Nicholas Pileggi penned this non-fiction novel in 1986. Wiseguy documented the story of Henry Hill – the Mafia man who turned informer.
Director Martin Scorsese based his 1990 film Goodfellas on the book.
Philip K. Dick’s science fiction novel was first published in 1968.
The futuristic story would become the plot of the 1982 Ridley Scott film Blade Runner starring Harrison Ford.
In 1903 the Heart of Darkness story by Joseph Conrad was set in Africa. In 1979 director Francis Ford Coppola moved the setting to Vietnam for his epic war film Apocalypse Now
The 1991 Behind the scenes documentary about the film was titled Hearts of Darkness: A Filmaker’s Apocalypse.
Action film Die hard was based on Nothing Lasts forever. This novel was a sequel to The Detective, which was also made into a film. The movie starred Frank Sinatra as Joe Leland, this character would later be renamed John McClane in Die Hard.
Interestingly the book was originally going to be adapted for the follow-up to the Arnold Schwarzenegger film Commando.
Nuclear war was the subject of this 1958 book by author Peter Bryant.
Later in 1964 the book was used as the basis of Stanley Kubrick’s classic Black comedy film, Dr. Strangelove or: How I Learned to Stop Worrying and Love the Bomb.
Billy Casper from Barnsley, South Yorkshire is the main character featured in this 1968 novel.
When the book was converted into a film it was changed to to Kes, the name of Billy’s
pet Kestrel.
We’ve cheated a bit on this one. This is a screenplay for the Ingmar Bergman directed film Virgin Spring, which itself was based on a 13th century Swedish ballad.
However, the film was remade again in 1972 as the video nasty horror The Last House on The Left, which also recently had a remake.