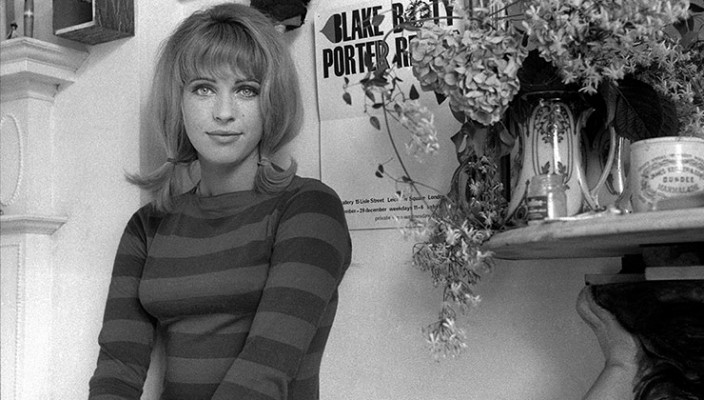 Discounting the likes of the Beatles and Rolling Stones who are obvious contenders; if we could select one person who epitomised that whole Swinging Sixties, art school, groovy London scene it would most likely be Pauline Boty. Yes we know. Not a name we’d heard of until fairly recently either but when you read more about her accomplishments and consider these were achieved with the backdrop of pretty appalling pre-feminist sexism and that she very sadly died when aged only 28 it makes them only the more remarkable. 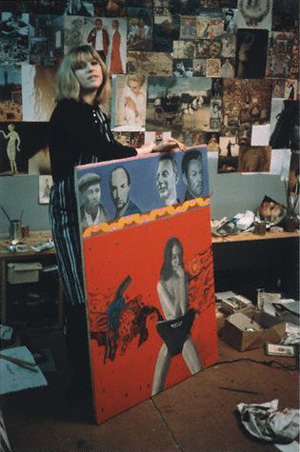 Pauline Boty was born in Carshalton, Surrey in 1938. The youngest of four children and the only girl, she was considered a bright student and in 1954 won a scholarship to study at Wimbledon School of Art despite the disapproval of her father. Her mother it seems was a frustrated artist and this was where her artistic tendencies (and much encouragement) came from. From here she progressed to the Royal College of Art in 1958 to study stained glass despite wanting originally to study painting. She was discouraged from applying to the School of Painting because admission rates for women were very low. This was a time when women artists were not considered as serious or worthy and the art world was ruled and run by a clique of men. We tend to forget quite how different it was back then for women wanting to progress and certainly Pauline Boty saw her fair share of the sexism that abounded in the art world and elsewhere. Had it not been for her photogenic looks and undoubted resemblance to Brigette Bardot (her classmates at Wimbledon called her the ‘Wimbledon Bardot’) it seems she may not have progressed in the way she did. Word has it when considering applications to the RCA from women the tutors didn’t feel the need to look at their portfolios – they just needed to see their photos as the girls were only there to keep the boys happy.

This was however a time of great excitement in the art world; sitting just on the cusp of the Sixties with the likes of Peter Blake, Derek Boshier and David Hockney as contemporaries Boty was without doubt in the right place at the right time. Looking back Peter Blake said: ‘It was as though everything was being invented. It was only a little more than 10 years after the war, and everything was new – television was young, theatre was exciting, cinema was exciting. There were all the new immigrants and places like Portobello Road were springing up. It was vibrant, and to be there was marvellous.’ 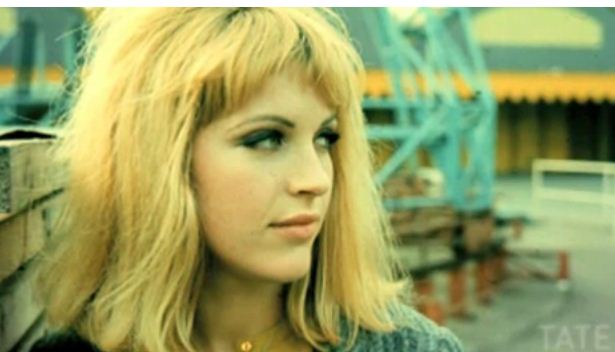 Boty completed her studies at the RCA in 1961 and almost immediately had her work featured in what many believe was the first ever Pop art exhibition – ‘Blake, Boty, Porter, Reeve’ at the AIA Gallery in London. In 1962 she featured in Ken Russell’s ‘Pop Goes the Easel’ a documentary about the then developing UK pop art scene and from this her acting career started to develop. She appeared in a few BBC and ITV plays and in 1963 with her then partner Derek Boshier was chosen from hundreds of applicants to be among the weekly dancers on the then uber-hip ‘Ready, Steady, Go!’ At around this time Boty met left-wing actor and writer Clive Goodwin and after what can only be described as a whirlwind 10-day romance married him in June 1963. Her marriage left many a man heartbroken not least Peter Blake; who said of Boty her only fault “was that she didn’t love me back”. Interestingly enough, prior to getting hitched Boty had been having a fling with married TV director Philip Saville who introduced Boty to her new husband. The relationship between Boty and Saville is said to be the inspiration for the 1965 film ‘Darling’ starring Dirk Bogarde and Julie Christie. 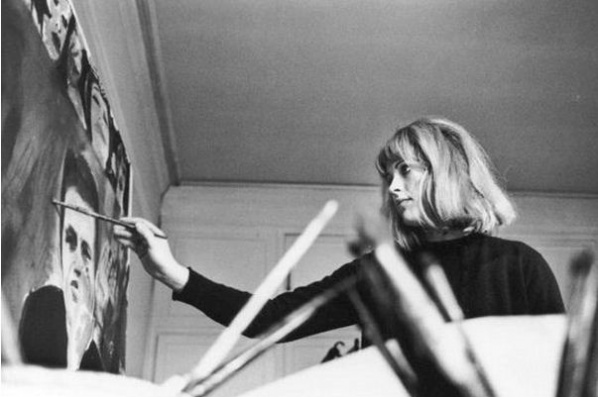 As pretty much the only female painting in the Pop art style, Pauline Boty’s work gave her the opportunity to turn the tables on the sexist men she encountered on a daily basis and she used sex and erotic images at a time when it was still very much taboo. Sexual images are now ten-a-penny and we take them for granted in advertising, the tabloid press and TV: however back in the early 1960s it was, without doubt, a very different time and culture. Boty was using images of women that hadn’t been used by female artists before and a lot of her work used very bright colours and close-ups of red flowers to represent the female sexual form. After her marriage to Goodwin, Boty’s work became more politicised and started to reference male hegemony, the Vietnam War and the Cuban Revolution.

Clearly Goodwin’s left-wing leanings had a profound effect on Boty and the way she saw her art. Not that this period in her life was all chin-stroking and worthy political idealising. Far from it in fact. Boty and Goodwin had a large flat in central London which became quite the place to hang out for aspiring playwrights, actors, directors and artists. Peter Blake (presumably still lusting after Boty even though she was married), David Hockney, Kenneth Tynan, professional scouser Roger McGough and rather bizarrely Bob Dylan who Boty bought over from the States and introduced to the London high-life. During this presumably hectic time Boty also found time to appear (albeit in an uncredited role) as one of Michael Caine’s many girlfriends in ‘Alfie’. 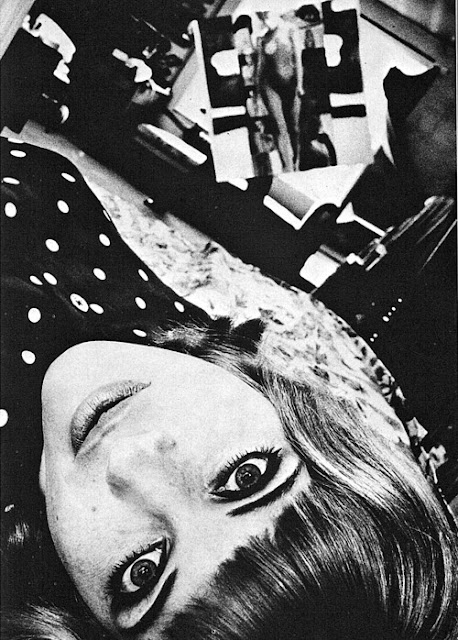 In the summer of 1965 Boty unexpectedly fell pregnant and during a routine examination a cancerous tumor was discovered. Boty refused to have an abortion and also would not have chemotherapy because of the potential risk to her unborn child. She smoked marijuana to ease the pain during the pregnancy and in February 1966 gave birth to a baby daughter. Sadly she passed away a few months later in July 1966 aged only 28. Tragically twelve years later Clive Goodwin himself died from a brain haemorrage in a Los Angeles hotel where he was due to meet Warren Beatty. The L.A. police thought he was drunk, arrested him and he died in police custody.

Boty’s paintings were stored away in a barn on her brother’s farm where they remained for the next thirty years and Boty’s legacy was pretty much forgotten. It seems those closest to her were so deeply affected by her untimely passing they didn’t have the energy or inclination to keep pushing her legacy forward and once Goodwin has passed on there was nobody left to carry the flame. It wasn’t until the 1990s when art historian David Mellor happened upon Boty’s appearance on ‘Pop Goes the Easel’ and took it upon himself to track down her paintings which were then exhibited in a Pop art exhibition at the Barbican. Boty’s work was the undoubted highlight of the show and shortly after, the Tate Britain bought ‘The Only Blonde in the World’ her 1963 portrait of Marilyn Monroe.

Quite why Pauline Boty still remains so unknown is a mystery and we reckon unless a film is made of her life it looks like that’s the way it will stay. Certainly if Boty had been French she would be lionised by the French art establishment. Unfortunately here in the UK we don’t view our artists with quite so much vigour and sadly it seems Pauline Boty is destined to remain a relatively unknown enigma. 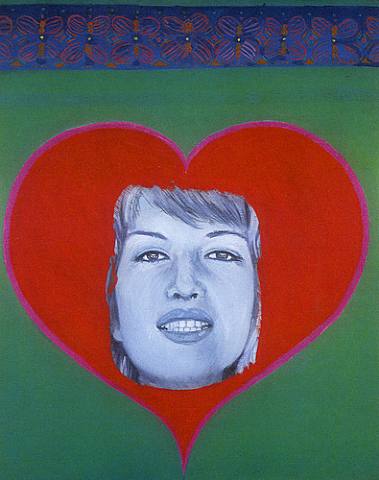 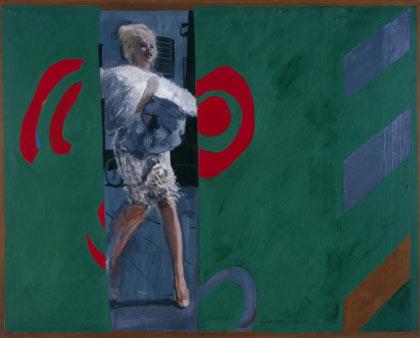