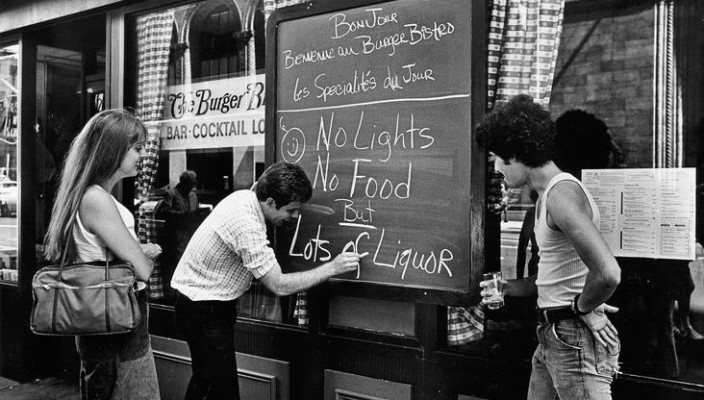 In recent modern history there have been a number of culturally significant events that have acted as genuine catalysts in pushing music and fashion forward. Mods and rockers fighting at Margate in ’64, the Woodstock festival in 1969 ,the Sex Pistols swearing on live TV at Bill Grundy in 1976 to name but a few. What is less well-known but nevertheless as, if not more, significant is the effect the New York blackout in July 1977 had on the then embryonic hip-hop scene in the South Bronx. This event is seen by many as the tipping point that saw hip-hop expanding from its roots and started it growing into the behemoth we know and love today.

The electricity blackout hit the whole of New York City sparing only two boroughs: Southern Queens and the Rockaways. At 8.37pm on July 13th the first of three massive lightning strikes hit a sub-station, the second hit power lines and the third struck transmission lines. This combined with a number of procedural failures on the part of Con Edison, the electricity supplier, caused an unprecedented knock-on effect creating a complete blackout within almost exactly one hour. It then took a full 24 hours before power was completely restored throughout the city.

The backdrop to the blackout was a significant financial crisis affecting the whole of the US (sound familiar?), an unusually hot and humid summer allied with the fact that New Yorkers were extremely worried about the ongoing Son of Sam murders which had seen six people killed in the previous 12 months by a lone gunman. (David Berkowitz also known as Son of Sam was arrested and charged with the murders a month after the blackout. Under questioning he claimed he was instructed to kill by a demon who possessed his neighbour’s dog.)

The last major blackout in New York happened in 1965 and resulted in very little looting and violence. In fact the atmosphere was almost party-like with people gathering in the streets and neighbours helping each other out. Whether this was because it had started during daylight hours thus enabling people to prepare better or whether the relative affluence of the mid-sixties made a difference is open to debate. What is certain is that in 1977 the fiscal crisis had resulted in significant government cuts to local services that affected many in the poorer communities who were often reliant on these services to ease financial hardships and crime levels across the States had increased massively in the ensuing 12 years.

On 13th July 1977 the blackout resulted in significant looting and violence. Over 3700 people were arrested and some 550 police officers were injured. Chaos reigned and the police were almost helpless in the face of unprecedented scenes. 50 cars were stolen from a Pontiac dealership in the Bronx and over 1600 stores were looted and damaged in the ensuing rioting and over 1000 fires started.

Many electronic stores were targeted during the looting spree and the DJ equipment stolen was soon put to good use. Back then this kind of equipment was way beyond the financial reach of most kids and, unlike now, there was no second-hand market to speak of. As Grandmaster Caz, one of the early pioneers (and one of the Cold Crush Brothers) so rightly points out: “It was like Christmas for black people. The next day there were a thousand new D.J.’s”