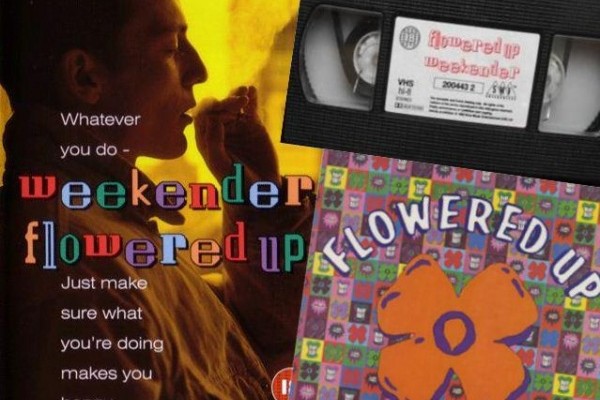 The short film Weekender by Flowered up was the condensed Quadrophenia for the Spike Island generation. The band were London’s answer to the Happy Mondays, they even had their own Bez styled dancer – the wonderfully named Barry Mooncult. The band had the baggy psychedelic sound of Madchester with a cockney twang.

The group formed in 1989 in the capital of cool – London’s Camden town. They had a couple of minor UK chart hits including the panpipe-tastic “It’s on”. They also made appearances on the music magazine covers of the era – Sounds, NME and Melody Maker. Their one and only album “A life with Brian” was released by Heavenly records in 1991, but failed to reflect their live performance.

The 18 minute film starred actor Lee Whitlock, he was probably best known at the time as being the son in the TV series “Shine on Harvey Moon”. WIZ, who directed the film, went on to direct music videos for Oasis, Massive Attack, Kasabian, Zero 7 and The Arctic Monkeys.

When the band split up Keyboard player Tim Dorney went on to form the band Republica. Unfortunately in October 2009 SInger Liam Maher died of a heroin overdose.Rob Turner from Heavenly records wrote a tribute to Liam in the Guardian  newspaper called How Liam Maher from Flowered up changed my life

Now Rave on to the wonderful Weekender by Flowered up.
FU – W by rediffusion – refresh page